Vice-President Wang Qishan said Thursday that the current international situation requires China and Russia to transform their generations of friendship into more concrete actions so as to further support each other and seek common development. 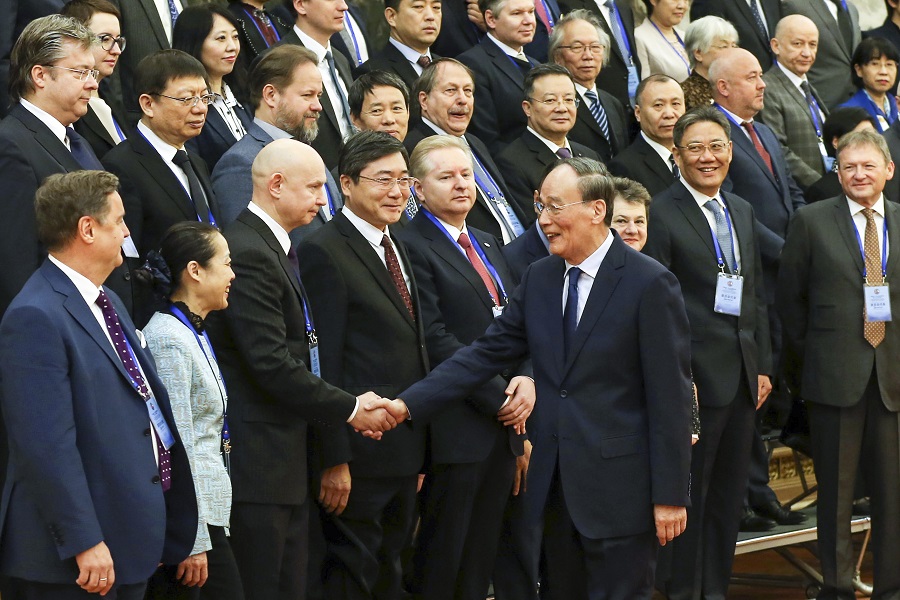 Vice-President Wang Qishan greets representatives of the China-Russia Friendship Committee for Peace and Development at the Great Hall of the People in Beijing on Thursday. (Photo: China Daily)

He made the remark when meeting with participants in the 12th plenary session of the China-Russia Friendship Committee for Peace and Development in Beijing.

Faced with both opportunities and challenges, Wang said, the two countries should focus on their directions and goals, remain calm and patient and continuously enrich their strategic coordination.

Wang said the China-Russia relationship has reached its best-ever level, and it has set a good example of country-to-country relations and effectively safeguarded world prosperity and stability.

It is the important consensus reached between the two countries' leaders, as well as the common aspiration of the two peoples, to build the China-Russia comprehensive strategic partnership of coordination for a new era, Wang said, adding that this relationship has strong vitality and huge potential.

Noting that the friendship between the two peoples serves as the foundation of developing bilateral ties, the vice-president urged the committee to firmly keep in mind its original mission of promoting friendly exchanges between civilians in China and Russia.

Wang said that the China-Russia relationship has forged ahead despite ups and downs over the past 70 years since the establishment of diplomatic ties.

"This is owing to the wisdom and efforts of generations of leaders and the people of both countries, as well as people who care about China-Russia friendship," he said, urging greater efforts in listening to public opinion so as to solve some practical problems.

The China-Russia Friendship Committee for Peace and Development, founded in 1997, is a major platform for people-to-people diplomacy between the two countries. President Xi Jinping and Russian President Vladimir Putin met with representatives of the committee during his visit to Russia in 2017. Xi praised the committee for its significant contribution to the development of bilateral ties.

In recent years, China and Russia have carried out comprehensive cooperation in all fields at various levels as bilateral political and strategic mutual trust has continued to deepen.

On Monday, Xi and Putin witnessed the launch of a landmark pipeline that will transport natural gas from eastern Siberia through Northeast China to Shanghai.

From Sunday to Wednesday, the two countries also held the 15th round of the China-Russia strategic security consultation and the sixth China-Russia meeting of institutionalized cooperation in law enforcement and security.