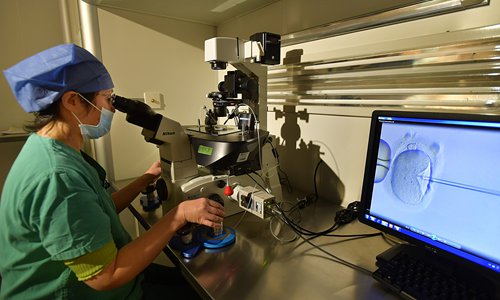 A doctor at the embryo transfer laboratory in the Reproductive Medicine Center of Wuhan Union Medical College Hospital combines sperm and egg. After the country relaxed its family planning policy in 2016, a growing number of women have turned to IVF treatment to have babies. Photo: VCG

China has witnessed a growing shortage of donated eggs as more couples chose to have children after the country relaxed its family planning policy in 2016. Couples unable to have children are having to wait up to 10 years for in vitro fertilization (IVF) treatment in public hospitals this year, Yangtze Evening News reported. The demand for assisted reproductive technology has risen significantly after the country loosened its policy, allowing couples to have two children. Patients with infertility have had to wait in long queues at hospitals in recent days, Liao Xi, deputy director of Beijing Perfect Family Hospital which specializes in infertility, said on a reproductive health forum on December 2, news site chinanews.com reported.Over 45 million people currently suffer from infertility, Li Yanqiu, deputy president of the China Association of Reproductive Health Industry, said on the forum. But Liao said that there are only 432 approved clinics nationwide performing around 700,000 fertility procedures each year. The lengthy waiting period in public hospitals has also led to a boom in the black market for donated eggs, while some couples have turned to clinics in foreign countries.Long waitsPosts asking for help and complaining about the long waiting period for donated eggs for IVF treatment are all over social media and online medical platforms.In a response to a patient query in May 2016, Sun Yun, who identifies herself as a doctor from Renji Hospital Shanghai Jiaotong University School of Medicine on the online medical platform haodf.com, said that patients who wanted IVF with donor's eggs had to wait at least five years in Shanghai due to the shortage. Jiang Yunshan, a doctor from the Reproductive and Genetic Center of the Central Hospital of Xiangtan, Hunan Province, told the Global Times that the long waiting period for IVF with donor's eggs was due to rising demand for IVF treatment and fewer qualified donors. "Donors have to meet many requirements on health, age and height," Jiang said. Candidates for IVF with donor eggs currently have to wait at least six years at the hospital.Seeing the opportunity, a number of US and Thai fertility clinics have opened accounts on China's Twitter-like platform Weibo to promote their business. A liaison office of a New York-based fertility center in Beijing has seen its business grow in the past two years. "The center opened its China branch and launched a Chinese website just two years ago, and the center has conducted around 60 IVF procedures for Chinese people this year," a nurse surnamed Gong told a Global Times reporter posing as a patient.   According to Gong, patients usually wait for around one month to receive IVF treatment in New York, with eggs donated from the US egg bank. "Some of our Chinese patients are transferred from public hospitals due to the lengthy waiting period or medical difficulties," Gong said. Black market boomThe egg shortage in public hospitals has also led to a boom in the underground market.  A Guangzhou-based egg donation agent surnamed Ren said that he could find egg donors in two days and arrange IVF treatment in Guangzhou public hospitals in a month. "You just let me know your preference for donors, such as her academic background, age, appearance and blood type, and I will find you the right one," Ren said.  Chinese media has been reporting on the underground egg market since 2015. Advertisements seeking egg donors and providing donated eggs can be found outside most public hospitals, and many seek to recruit college students as donors."A 17-year-old girl almost died after selling 21 of her eggs in Guangzhou, Guangdong, the Nandu Daily reported in 2016.According to China's assisted reproductive technology code released by the National Health and Family Planning Commission in 2003, organizations and individuals were prohibited from conducting egg donations for the purpose of making profit. Only eggs left from IVF treatment could be used for donations, and their sale and purchase were strictly prohibited. Zhu Lieyu, a lawyer from Guoding Law Firm in Guangzhou, submitted a proposal to include the selling of eggs in China's Criminal Law in 2015. "Illegal agencies use misleading advertisements to recruit egg donors and unqualified clinics to perform egg retrievals that could cause infertility in young women. Their actions have had a severe social impact, and should be considered a crime," Zhu told the Global Times.