BEIJING, March 16 (Xinhua) -- Almost half a year after Chinese President Xi Jinping's pledge to make the country carbon-neutral before 2060, the roadmap to achieve the goal is getting clearer under Xi's push as authorities and industries scale up their green efforts. 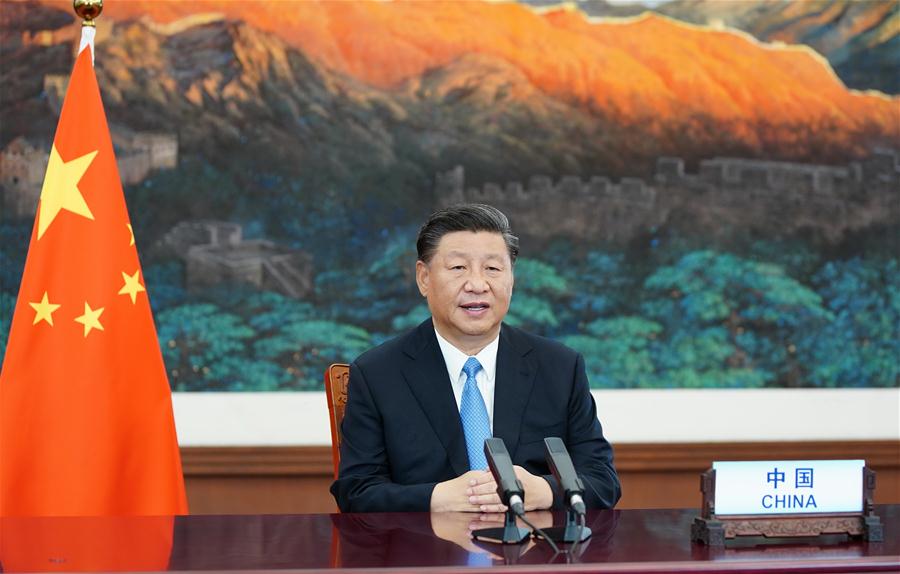 China aims to have CO2 emissions peak before 2030 and achieve carbon neutrality before 2060, Xi announced at the general debate of the 75th session of the United Nations General Assembly via video in September last year.

Since then, vigorous policies have been rolled out on top of the already hefty input in green development. At a meeting of the Central Committee for Financial and Economic Affairs on Monday, Xi called for incorporating the peaking of carbon emissions and carbon neutrality into the overall layout of building an ecological civilization.

"Peaking carbon emissions and achieving carbon neutrality is a tough battle, it is also a major test of the party's capabilities in governing the country," the meeting stressed.

While China's economic rise over the past decades was largely powered by coal, the country, now among the world's biggest investors in green energy, is increasing pace to shift to other renewables including wind and solar.

Starting in February, China implemented a set of interim rules for the management of carbon-emissions trading designed to drive down the emissions of big power users.

Under the scheme, firms that exceed the emission caps can buy emission quotas from others with a lower carbon footprint.

A total of 2,225 power firms are included in the project. More fields, such as the steel and aluminum production sectors, will be included in future carbon trading.

The campaign for green energy also enabled the public to embrace a more eco-friendly lifestyle, as was shown by the country's booming sales of new energy vehicles.

On the back of the united efforts, the share of clean energy consumption in the country has risen from 19.1 percent in 2016 to 24.3 percent in 2020, data by the National Bureau of Statistics showed.

While addressing the Climate Ambition Summit via video link in December last year, Xi announced that by 2030, China aims to lower its carbon dioxide emissions per unit of GDP by over 65 percent from the 2005 level and increase the share of non-fossil fuels in primary energy consumption to around 25 percent.

To move toward the goal, energy consumption per unit of GDP and carbon dioxide emissions per unit of GDP in 2021 will be reduced by 13.5 percent and 18 percent, respectively, according to this year's government work report, which also promised to draw up an action plan for peaking carbon emissions before 2030.

While expanding the use of green energy, bringing down carbon emissions to net zero, which means achieving a balance between emitting carbon and absorbing carbon, will require the development of new technologies to capture and store emissions.

Monday's meeting also called for efforts to push forward major breakthroughs in green and low-carbon technologies and accelerate the promotion and application of such technologies for reducing pollution and carbon emissions.

It has underscored improvements in policies on fiscal taxation, prices, finance, land and government procurement that are conducive to green and low-carbon development.

"To peak carbon emissions and achieve carbon neutrality is an extensive and profound systemic reform for the economy and society," Xi noted at Monday's meeting.