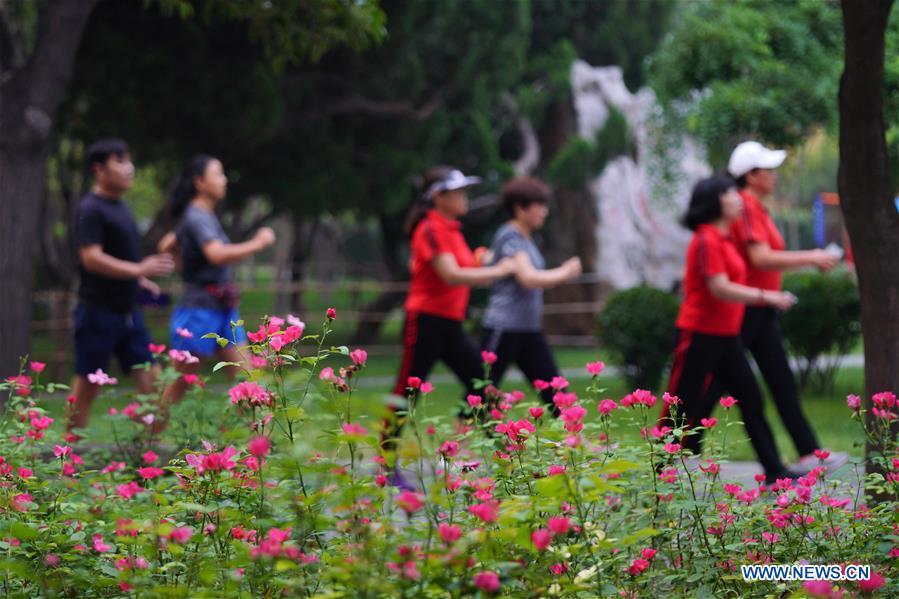 Accompanied by rhythmic music, Liu Shuangyao and dozens of his cohorts line up, evenly spaced, and walk in an orderly fashion along the banks of Labor Lake in Qiqihar, Heilongjiang province.

Every day, the fitness enthusiast and his friends follow the same routine－always moving with a purpose and at a steady pace.

"There were a lot of people walking by Labor Lake, but everyone walked in different ways and at different speeds," explained Liu. "I used to play with my cell phone while walking. It was not easy to achieve my purpose of gaining fitness." In order to increase the intensity, Liu hung a small speaker from his waist to play rhythmic music, and fixed his walking speed.

"Later there were more and more people following me," Liu said. One of those is Li Meng.

"My knee is injured and I am not suited to running, so walking is very suitable for me, especially when I am driven on by music," said the 34-year-old Li.

"I don't want to be left behind when I walk alongside other people. Doing an hour of exercise will make me sweat a lot."

The daily gathering of walkers in the northeastern city has developed something of a community feel.

"Every day we exercise at a fixed time, one person and one position, it is easy to find who is not here," said Liu.

As well as Liu's group, there are many other walking 'teams' at Labor Lake. As Chinese people pay more attention to their health, many are choosing walking as their preferred method of exercise.

In Fujin, also located in Heilongjiang, two signs in the middle of the city square display the words: "Starting Point" and "End Point" respectively. Between the signs is a fitness trail that is hundreds of meters long, attracting many citizens to amble along it.

There are many water systems in Heilongjiang, and the riverside of each city is an important place for local people to exercise.

In Harbin, Jiamusi and Hegang, people can often be seen walking along rivers in the evening. The local government often organizes large-scale walking activities along rivers to attract more people to participate in exercise.

In order to better meet people's fitness needs, several new sports parks have been built in many cities in Heilongjiang province for people to walk in.

In Harbin, the government converted a golf course into a free sports park, with thousands of meters of fitness trails shuttled around the park and covered with shock-absorbing plastic.

Today, the number of people in China who regularly participate in physical exercise is about 400 million, and there are more than 3 million sports venues across the country.