Wang Yi calls on US business leaders to cooperate despite frictions 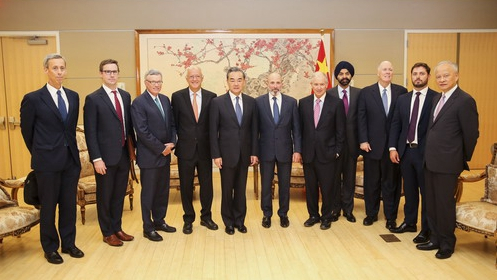 Chinese State Councilor and Foreign Minister Wang Yi has called on US business leaders to commit themselves to cooperation despite problems facing both countries.

He made the call during his meeting with representatives of the US-China Business Council and National Committee on United States-China Relations in New York on Monday.

Wang said, the relations between China and the US, the two biggest economies in the world and permanent members of the United Nations Security Council, are not only extremely important to people of the two countries but also indispensable to maintaining the world's peace, stability and development.

The most valuable experience from the 40-year China-US ties is that only cooperation can generate win-win outcomes, while confrontation will lead to lose-lose results, Wang added.

The Chinese state councilor pointed out that certain US forces have recently been making baseless accusations against China on trade and security, which has poisoned the atmosphere of China-US ties.

The Chinese side always believes that no matter what the problem is, it can be resolved through equal and candid conversations, Wang stressed.

Addressing questions raised by the American representatives about market access, China's reform and opening-up and its economic restructuring, Wang emphasized that China will continue to advance reform and opening-up. He also listed several of China's achievements in that aspect since China joined the World Trade Organization, including: lowering average tax rate to 9.8 percent which is below the average figure of developing countries; opening up 100 departments in trade in services, which is way more than the average of 54 among developing countries; implementing local registration for over 96 percent of the foreign direct investment; and continuously shortening the negative list for foreign investment.

Wang said China does not actively seek a trade surplus and is willing to tackle the issue of trade imbalance through negotiations.

But he stressed that talks should be based on equality and honesty, and cannot take place under threats and pressure.

The fact that the US started an even larger-scale imposition of sanctions on China before the new round of talks between the two countries exactly shows the lack of sincerity on the US side, Wang noted.

He called on the US-China Business Council and National Committee on United States-China Relations to play a positive role in forming a healthy and win-win relationship between the two countries.

The US participants echoed that friendly China-US ties are in line with the fundamental interests of both sides. They said most business insiders in the US disagree with the imposition of tariffs on China.

The US representatives also expressed their willingness to push for constructive ways during practical dialogues to resolve the structural problems in the US-China trade relations, such as the signing of a bilateral trade agreement.