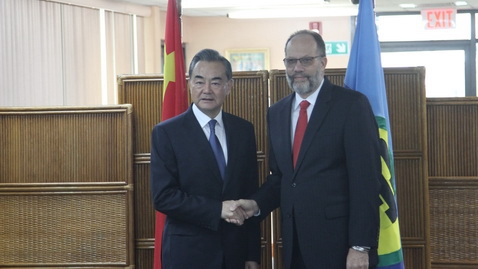 Chinese State Councilor and Foreign Minister Wang Yi has called for closer cooperation between China and the Caribbean Community (CARICOM) to further build a community of shared future between the two.

He made the remarks on Saturday during talks with  CARICOM Secretary-General Ambassador Irwin LaRocque at the bloc's secretariat headquarters in Georgetown, Guyana.

Wang said the CARICOM is a community for developing countries, and the most significant integration organization in the Caribbean region.

China and the CARICOM member states are all developing countries, and the two share extensive common interests, Wang emphasized.

He also said China will make the best efforts to provide help to developing countries, including the Caribbean nations under the framework of South-South cooperation.

LaRocque spoke highly of the influence and leadership China exerted in addressing international affairs such as climate change, as well as its positive role in protecting the benefits of developing countries.

He said CARICOM appreciates China's initiative of building a community of shared future for mankind, and is willing to deepen cooperation and coordination with China on multilateral agendas to safeguard the overall interests of developing countries.

Wang's visit to the CARICOM secretariat is the first made by a Chinese foreign minister.