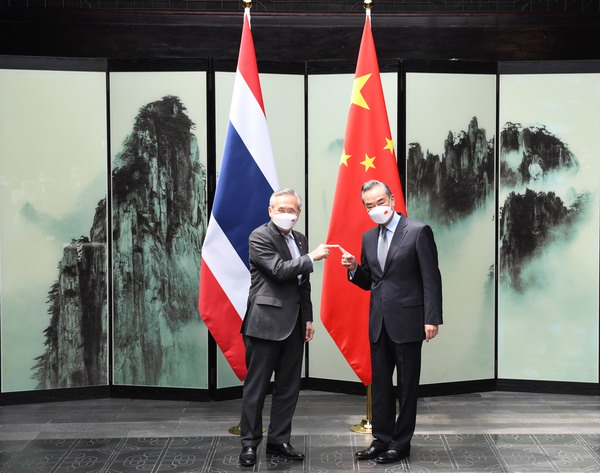 Both sides should speed up cooperation over the Belt and Road Initiative, railway, industrial parks, vaccines, and drugs research and development, Wang said.

China and Thailand should take their implementation of the Regional Comprehensive Economic Partnership (RCEP) agreement as an opportunity to tap the potentials of bilateral economic and trade cooperation, and expand cooperation in electronic technology, digital economy and new energy, Wang added.

The RCEP, which took effect on January 1, includes Thailand and the other 9 members of the Association of Southeast Asian Nations (ASEAN), as well as China, Australia, Japan, New Zealand, and South Korea.

Noting that this year marks the 10th anniversary of China-Thailand comprehensive strategic cooperative partnership, Wang called on the two countries to work together to write a new chapter in bilateral relations.

Don recalled his first trip to China in 1975 when the two countries established diplomatic relations and said his country values its traditional friendship with China.

Thailand is ready to work with the Chinese side to build the Belt and Road and participate in the Global Development Initiative, he said, and hopes to expand cooperation on agricultural products and inter-connectivity between Thailand and China, and ensure the security of industrial chain and supply chain.

Noting that China, Thailand and Indonesia will host the meetings among BRICS, APEC and G20 members this year respectively, the Chinese foreign minister said China is ready to work with the two countries to inject more positive energy and stability into the world and send the message of Asian countries' commitment to peaceful development.

On Ukraine, Wang stressed the importance for Asia to maintain peace and stability in the region, resist unilateral sanctions and long-arm jurisdiction that have no basis in international law, and prevent tensions and crises from happening in the region. Don said he appreciated and understood China's objective and fair position on the issue.

The two sides also exchanged views on the Myanmar issue.