CHINA Wang Yi: China, US should manage differences based on mutual respect

Wang Yi: China, US should manage differences based on mutual respect 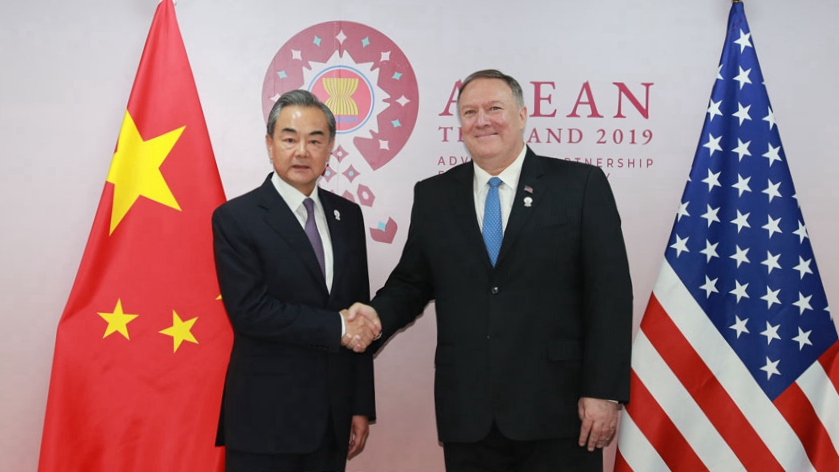 Both China and the United States should manage their differences based on mutual respect, Chinese State Councilor and Foreign Minister Wang Yi said on Thursday.

Wang made the remarks when meeting with US Secretary of State Mike Pompeo  on the sidelines of the on-going ASEAN meeting in Bangkok.

Their meeting came just one day after negotiators from China and the US concluded their 12th round of trade consultations in Shanghai.

The resumption of the trade talks proves that no matter how many problems the two countries may face, both sides need to communicate face to face to find a solution, Wang said, adding there's more room for cooperation than differences.

China, US have common interests aside from different values

During their meeting, Wang and Pompeo discussed how to implement the consensus reached between Chinese President Xi Jinping and his US counterpart Donald Trump on the sidelines of the G20 summit in Osaka. In particular, the two sides discussed promoting China-US relations through coordination, cooperation and stability.

China and the US share common interests aside from having different values, Wang said, urging the two sides to enhance communication and reduce misjudgment in pursuit of a win-win solution that will benefit both countries and the world.

China, US should accurately assess each other's strategic intentions

He called on both sides to actualize China-US cooperation through high-level dialogue and consultation on the basis of mutual respect.

In terms of recent interference in cultural exchanges, Wang said China hopes that the U.S. will pave the way instead of creating obstacles for people-to-people exchanges between the two countries.

Pompeo told Wang that the US welcomed and supported cultural exchanges between the two sides. Thus, if problems arise, the US side is willing to solve them responsibly.

China urges US to respect its core interests and major concerns

Wang also urged the US to stick to the one-China policy and rightfully handle the sensitives issues with Taiwan.

He also asked the US to mind its words and behavior on issues of China's core interests and major concerns, such as issues regarding the South China Sea, China's Xinjiang Uygur Autonomous Region and the Hong Kong Special Administrative Region.

Both sides agreed to keep in touch on the issues of mutual concern.

For his part, Pompeo expressed that he and Trump had no intention to obstruct China's development, and wished to see the smooth progress of the China-US economic and trade consultations.

The top US diplomat reaffirmed that the US will stick to the one-China policy and the three joint communiques.

China welcomes US to resume working-level dialogue with DPRK

During the meeting, the two sides have changed views on international issues, mainly on the Korean Peninsula issue.

Pompeo expressed Washington's willingness to implement the agreement reached with the Democratic People's Republic of Korea (DPRK) leader in Panmunjom as soon as possible and to resume the working-level dialogue with Pyongyang at any time.

Noting that China welcomed this, Wang said China hopes to create an environment and conditions for the resumption of meetings and hopes that the DPRK and US could meet each other halfway.

He also expressed China's support for the consensus reached at the Singapore summit between the US and DPRK leaders, including full denuclearization and the establishment of a peace mechanism on the peninsula.

China hopes that Washington and Pyongyang could achieve these two goals with a phased and synchronized approach, Wang added.