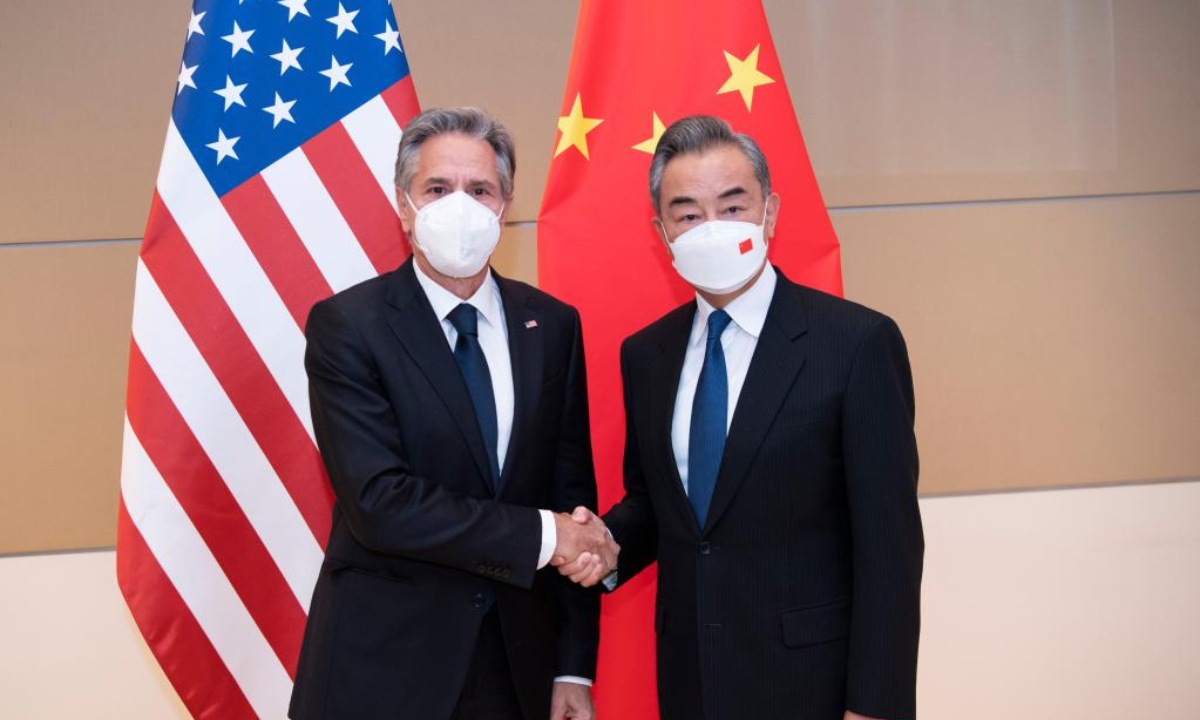 Chinese State Councilor and Foreign Minister Wang Yi (R) shakes hands with US Secretary of State Antony Blinken during their meeting at the site of the Permanent Mission of the People's Republic of China to the United Nations in New York, on Sep 23, 2022. Photo:Xinhua

When Chinese State Councilor and Foreign Minister Wang Yi met US Secretary of State Antony Blinken on the sidelines of the 77th UN General Assembly (UNGA) in New York, he delivered China's solemn position on the recent wrong behaviors of the US on the Taiwan question and stressed that the Taiwan question is the kernel of China's core interests.

Both Wang and Blinken consider the latest engagement between the Chinese and US officials as "frank, constructive and important." Observers said it reflects that both sides attach great importance to the China-US relationship but the US has to put its "beautiful words" into practice and abandon its duplicity in its China policy.

During the meeting, Wang pointed out that US' actions on the Taiwan question run counter to its clear political promise.

The US should return to abiding by the three China-US communiques and the one-China principle exactly as they are, reiterate its one-China policy without added elements, and unequivocally state its clear opposition to "Taiwan independence" separatist activities of all forms, Wang said.

Blinken told Wang that the US does not seek a new cold war, and there is no change in its sticking to one-China policy and it does not support "Taiwan independence." Likewise, US President Joe Biden also said in his speech at the United Nations General Assembly on Wednesday that the US remains "committed to its one-China policy." But just a few days ago Biden said during a CBS News interview that the US troops will "defend Taiwan" if Chinese military makes an "unprecedented attack."

Under the circumstance of US lawmakers coming up with the so-called Taiwan Policy Act, Wang's words should be heard by those political forces in the US supporting the "Taiwan independence," Diao Daming, an associate professor at the Renmin University of China in Beijing, told the Global Times on Saturday.

Those moves with the attempt of containing China through the Taiwan question are extremely dangerous, and it's hoped that the US government should put those "beautiful words" into real actions, Diao said. 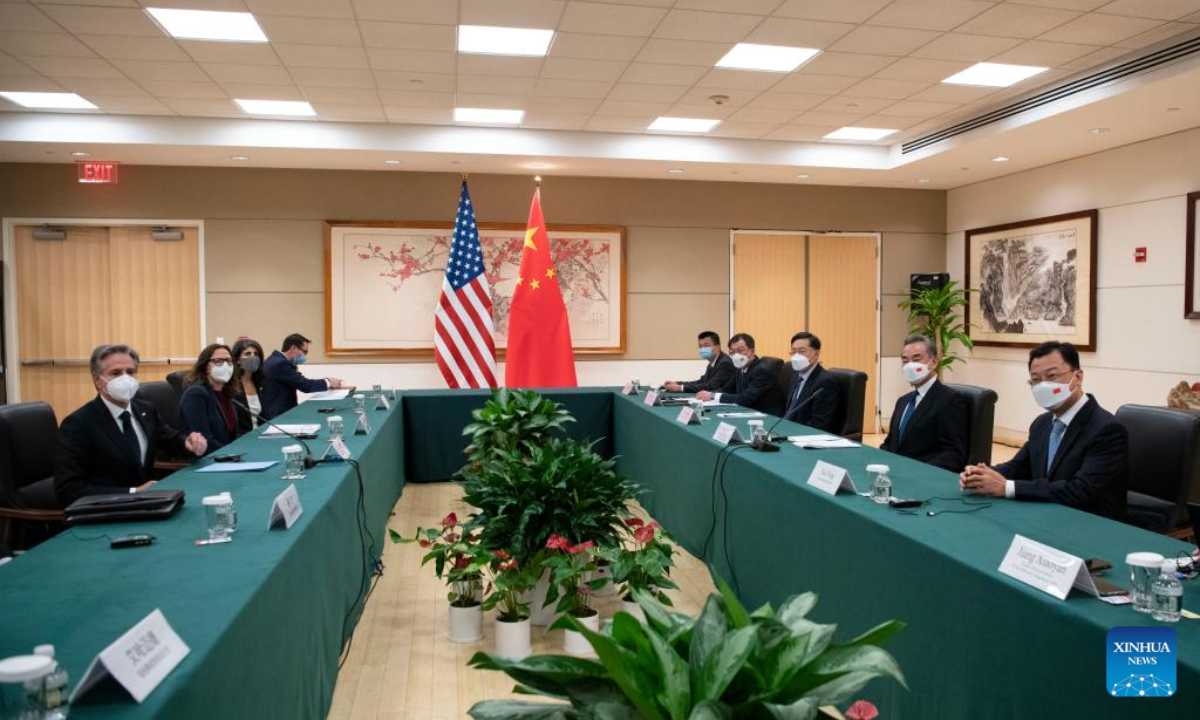 Chinese State Councilor and Foreign Minister Wang Yi (2nd R) meets with US Secretary of State Antony Blinken (1st L) at the site of the Permanent Mission of the People's Republic of China to the United Nations in New York, on Sep 23, 2022. Photo:Xinhua

In recent weeks, the US ramped up efforts in provoking China over the Taiwan question. The provocative visit of the US house speaker Nancy Pelosi to the island is believed to have changed the status quo of the Taiwan Straits. Even more so after some US lawmakers visited the island following Pelosi's suit.

During the ongoing UNGA, Wang has been interacting with US nongovernmental organizations, including think tanks, and dignitaries including former secretary of state Henry Kissinger. The Taiwan question has been a substantial part of those exchanges.

As China attaches great importance to China-US ties, it explains why the Wang the Chinese state councilor and foreign minister spent so much time to reiterate China's clear position on the Taiwan question, which serves as the most important political foundation for China-US relations but has been shaken by the US government's duplicity, Diao noted.

China has the resolve to ensure stable and constructive China-US relations, but our resolve is equally firm to safeguard core interests and counterstrike with unprecedented measures in case of provocations, Lü Xiang, a research fellow at the Chinese Academy of Social Sciences, told the Global Times in an earlier interview.

The Chinese state councilor stressed that it's utterly impossible for a peaceful resolution to coexist with "Taiwan independence."

Speaking on China-US ties, Wang said that there exist common interests and profound differences simultaneously between China and the US, a reality that will not change. The two countries were aware at the very beginning of their engagement that they were dealing with one another with a different system, which has not become an impediment to forging bilateral cooperation based on common interests, nor should be a reason for confrontation or conflict between the two countries.

The duplicity of the US government in dealing with China is not acceptable - in one way the US seeks cooperation to solve some problems but it also treats China as a "threat" by colluding with its allies to hype on such threat, Diao said.

Still, such high-level communication between the two countries should be maintained and but it still depends on whether the US can meet its commitments, Chinese experts said.

The latest engagement shows that China attaches great importance to the bilateral ties and making those good gestures is for the sake of safeguarding the stability of the world, the region and commons interests of China and US in a responsible manner, reflecting China's sense of responsibility as a big power, Diao noted.

"However, whether the US-China relations could ease depends on how the US fulfill its promises," the expert said, "the US should correct its mistakes first."

Wang also expressed the hope that the US side will correct its perception about China, and rethink and change its China policy guided by containment and suppression. Washington should abandon its intention to deal with the Chinese out of a position of strength, neither should it always contemplate about containing China's development or frequently resort to unilateral bullying.

The US should create an environment conducive to the resumption of normal exchanges between the two sides, and promote the return of China-US relations to a healthy and stable track of development, Wang said.