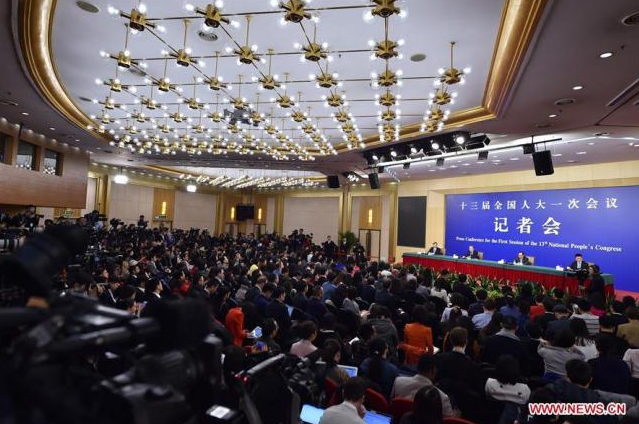 Chinese Foreign Minister Wang Yi takes questions on China's foreign policies and foreign relations at a press conference on the sidelines of the first session of the 13th National People's Congress in Beijing, capital of China, March 8, 2018.(Photo: Xinhua)

Foreign Minister Wang Yi's annual press conference to the world media gathered this week for the inaugural session of China's 13th National People's Congress in Beijing has triggered a spate of media commentaries. Most of these highlighted his optimism about addressing President Donald Trump's protectionist measures and his much-hyped trade war with China. Closely related have been comments on Wang Yi's faith in the new dynamism of inter-Korean talks and Kim Jong Un's offer of the denuclearization of North Korea. These recently revived inter-Korean interactions have already led to President Donald Trump accepting Kim Jong Un's offer for direct dialogue for which US leadership seems least prepared.

Near home, however, amongst several other issues that Wang Yi underlined was his detailed elucidation on enhancing trust and friendship between China and India. Wang described this as "an issue that needs to be addressed urgently." But more than its urgency, it also exhibited both hope and confidence which have been the hallmark of Wang Yi's assessments on China-India relations. He underlined how, in spite of several tests and difficulties in recent past, the China-India relationship "has continued to grow" and that leaders of these two nations have successfully developed "a strategic vision for the future of their relations." It is against this backdrop that Wang urged that the "Chinese dragon and Indian elephant must not fight each other but dance with each other," reiterating his hope that "if China and India are united their one-plus-one will be equal to not just two but also eleven." It is this new formulation of Foreign Minister Wang Yi that can be seen already stimulating various positive inferences about recent episodes and events in China-India ties.

Indeed, in this new frame of 'one-plus-one equals eleven', some of their most recent interactions could even mark a turning point in their persistent tension for last several years. India, for instance, has been agitating about China repeatedly asking for more discussion on India's membership to the Nuclear Suppliers Group or for naming Pakistan based Jaish-e-Mohammed chief Azhar Masood as terrorist in the UN Security Council sanctions list. Similarly, China has repeatedly expressed its discomfort about the visits of Indian leaders, and especially of a Tibetan separatist, to disputed frontier regions in India's northeast. Experts believe that it was perhaps such visits that triggered their 73-day long military standoff at Doklam.

It is in this backdrop that in a well-publicized February 22 intervention from the new foreign secretary Vijay Gokhale, India's Cabinet Secretary issued a notice instructing all government representatives not to participate in Tibetan events. This was followed by the Foreign Secretary's maiden visit to China on February 28 where he sought to assure China's leaders that India was being fully sensitive to China's concerns and that it was initiating restraints on related activities in India. This was done, some say, to ensure there would be no Doklam 2.0 crisis.

If these insinuations were to be true then past weeks have witnessed Beijing and New Delhi responding to each other's most critical anxieties, i.e. China's anxieties about India facilitating separatist activities against China and India's concerns about China-Pakistan 'all weather friendship' making Beijing defensive about Islamabad's misadventures with India. Now add to this startling new figures released this week by China's General Administration of Customs. According to these, China-India bilateral trade for 2017 shows an unprecedented rise, reaching $84.45 billion USD. For nearly a decade it had been stagnating at around $70 billion USD. Also, their bilateral trade had become one-sided which makes the 40 percent increase in India's exports exhilarating, almost calling for an explanation. Add to this the news that India's first female Defense Minister will be visiting China this month followed by the Prime Minster going to China in June to attend the 2018 Qingdao summit of the Shanghai Cooperation Organization.

All this surely lends credence to this newfound enthusiasm about grounds being laid for a reset in China-India ties.