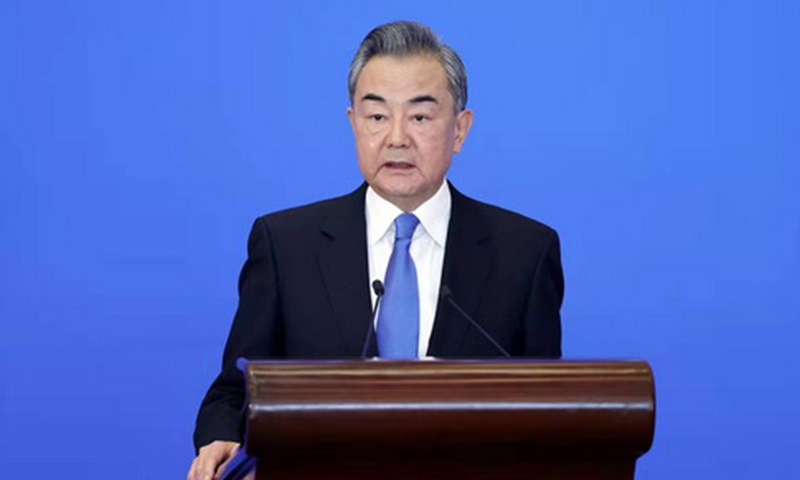 State Councilor and Minister of Foreign Affairs Wang Yi delivers a speech at the Symposium on the International Situation and China's Foreign Relations in 2021. (Photo: fmprc.gov.cn)

While delivering a speech during the opening ceremony of a Beijing-based annual symposium on international relations, Chinese State Councilor and Foreign Minister Wang Yi reviewed China's diplomacy in 2021, and stressed China's consistent diplomatic stance, saying that China has been on the right side of history.

Standing at the crossroads of our time, we see two different orientations: one is to revert to the Cold War mentality, provoking division and confrontation and creating blocs; the other advocates solidarity and cooperation for the common well-being of mankind, win-win cooperation, equality and respect, Wang said.

“The contest between the two orientations will have a profound impact on the future of mankind,” Wang said.

Talking about priorities for 2022, Wang said China's diplomacy will strive to create a more stable and favorable external environment for the great cause of China, such as the 2022 Beijing Winter Olympics, containing the epidemic, the steady progress of China-US ties, and the firm defense of China's core interests.

Wang spoke highly of China-Russia strategic coordination, which has withstood various tests and blossomed with vitality, setting a good example of mutual trust between major countries and injected more stability into an uncertain world.

In contrast, Wang said that the fundamental reason why China-US relations have encountered serious difficulties and multiple challenges lies in US strategic misjudgment.

"Cooperation benefits both, and fighting hurts both, too. It is the most important lesson learned from more than half a century of exchanges between China and the US," said Wang. "History will continue to prove this truth."

Wang also said China and Europe have far more common interests than differences, and China hopes that the EU will continue to uphold strategic independence.

Noticing Wang’s China-Russia relation remarks were ahead of remarks on China-US ties, some experts said that facing increasing international strategic instability, it is of worldwide significance to further deepen the comprehensive strategic coordination between China and Russia.

In the past two or three years, when talking about major country relations, China will put its relations with Russia first. Although the US is a vital part of China's diplomacy, the importance of China-Russia relations has been steadily rising, Li Haidong, a professor at the Institute of International Relations of the China Foreign Affairs University, told the Global Times on Monday.

2022 marks the 50th anniversary of former US president Richard Nixon’s ice breaker to China, which was regarded as an opportunity to improve China-US relations.

Experts said that although China has always been a staunch force in support of the positive development of bilateral ties, due to the sharp ideology and geopolitical opposition with almost no compromise in US’ China policy, bilateral ties are in a high degree of uncertainty.

“The most pressing challenge in the international situation is the deepening of global strategic instability and rising risks of confrontation… Without stability, all global challenges cannot be solved, which is to the detriment of all nations,” Yang Xiyu, a senior research fellow at the China Institute of International Studies in Beijing, told the Global Times on Monday.

At a time when China-US relations, the biggest variable affecting world stability and development, faces challenges, the deepening of China-Russia comprehensive strategic coordination has a global significance of stabilizing the overall situation, Yang said.

No matter how much anti-China US politicians howl and sour bilateral relations, China's diplomacy highlights strategic focus: you play your cards and I play mine, analysts said.

US plays its “confrontation card” while China plays “win-win cooperation card,” Yang said. “China is confident that mutually beneficial cooperation will win more support, rather than divide and fight.”

Minister Wang made it very clear that China's diplomacy aims to create a favorable external environment for the great cause of the Party and the people. When China runs its own affairs well and becomes stronger, it will be able to force the US to return to the right track of no conflict, no confrontation, mutual respect and win-win cooperation, Yang said.

Wang at the event also noted that Taiwan is a wanderer who will eventually return home, not a pawn to be used. China must be reunified and will surely be reunified.