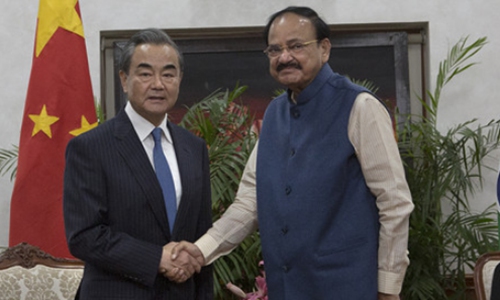 In accordance with the political guiding principles on the Sino-Indian border issues, China has put forward a practical framework on solving the border issues, which has attracted the attention of the Indian side, said Chinese State Councilor and Foreign Minister Wang Yi when meeting with Indian Vice President Venkaiah Naidu on Saturday in New Delhi, India.

Wang added that the two sides have also reached consensus on confidence building measures and cooperation in border areas.

The special representatives' meeting aimed to implement the consensus between the leaders of the two countries, sort out the important fields for cooperation and map out the development of bilateral relations next year, Wang noted.

The leaders of China and India, during their second successful informal meeting in Chennai, India, charted the direction for the development of bilateral relations and reached important consensus on the proper settlement of border issues, said the Chinese foreign minister.

The China-India bilateral relations are facing new opportunities for development as the two countries will celebrate the 70th anniversary of diplomatic ties next year, said Wang.

Naidu said that India is willing to use the anniversary as an opportunity to promote bilateral ties to a new level.

He congratulated Wang on the positive progress made during the 22nd Special Representatives' Meeting on the China-India Boundary Question held earlier on Saturday.

Wang arrived in India on Friday for the special representatives' meeting at the invitation of Indian National Security Advisor Ajit Doval.