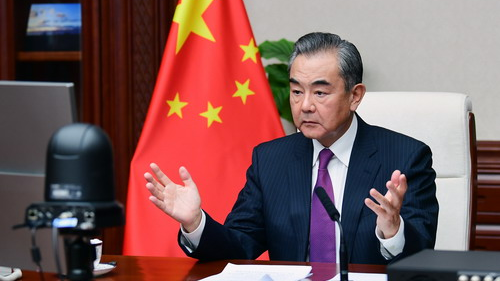 Chinese Foreign Minister Wang Yi on Tuesday proposed building up a multilateral dialogue platform for the Gulf region to inject impetus to easing tensions under the premise of safeguarding the comprehensive Iran nuclear deal.
He made the remarks during a ministerial session of the United Nations Security Council (UNSC) on the Gulf region held via video link.

Noting that mounting tensions in the Gulf region have severely undermined regional and even international peace and security, Wang urged UNSC members and Gulf nations to seek the key to peace with sincerity and goodwill, and actively respond to the aspirations of the international community, especially people in the region.

Calling the Gulf countries China's good friends and partners, Wang expressed willingness to work with all countries in the region and the international community to continue contributing to the area's security and stability and jointly build an "oasis of security."

He further added that building up a multilateral dialogue platform for the Gulf region will help reach new consensus among countries.

The platform will be equal and open, Wang said, suggesting that all parties should follow the principles of mutual respect, mutual understanding and mutual accommodation, join the dialogue process and address their respective concerns through consultation on an equal footing.

The platform will be an action-oriented one, he added, stressing that all parties should follow the principle of reciprocity, synchronization and meeting each other halfway, and focus on building trust and releasing goodwill.

Moreover, the platform will aim at making continuous progress, he said.

All parties should work together to solve the easier issues first and then move on to the difficult ones so as to make gradual progress, the foreign minister said. By dynamically adjusting the agenda, sustained progress on the dialogue can be ensured, he added. 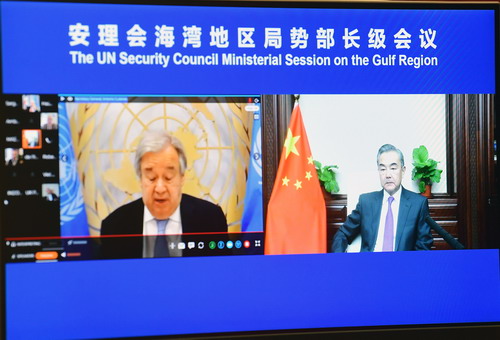 UN Secretary-General Antonio Guterres also stressed the importance of the Joint Comprehensive Plan of Action, saying that it is an important instrument against nuclear proliferation and for regional security.

"In the longer term, I see the value of establishing a new regional security architecture to address the legitimate security concerns of all stakeholders," he said.

Russian Foreign Minister Sergey Lavrov echoed that the UN's mediation may help stabilize the situation in the region.

The foreign minister of Russia, which holds the rotating presidency for UNSC this month, hosted the ministerial session which was attended by other UNSC member states, as well as foreign ministers of the Gulf region countries and the UN Secretary-General.