CHINA Wang Yi: Unilateralism will bring damage to all

Wang Yi: Unilateralism will bring damage to all 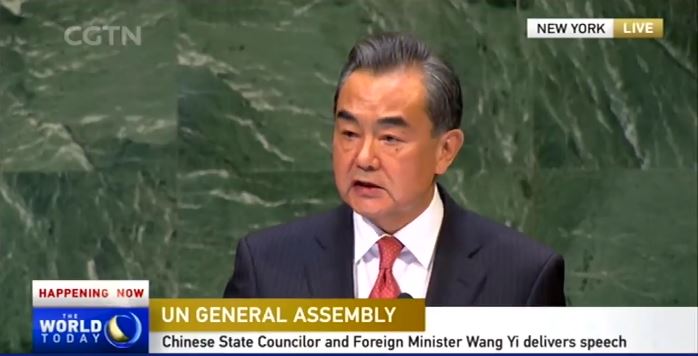 Protectionism will only hurt one's self and unilateral moves will bring damage to all, said Chinese State Councilor and Foreign Minister Wang Yi on Friday.

Wang made this remark in a speech at the General Debate of the 73rd Session of the General Assembly of the United Nations.

No one should be allowed to put its own interest above others, said Wang.

The Chinese official has called all parties to safeguard the rules and orders, uphold fairness and justice while upholding the United Nations' central role in international affairs.

Expressing China's full support to denuclearization, Wang said China hopes to see positive moves made by both the Democratic People's Republic of Korea (DPRK) and the United States, to meet each other halfway.

The DPRK side should put forward concrete step towards denuclearization, while the US giving "timely and positive responses", Wang added.

China is willing to facilitate dialogue between the DPRK and the US, and will continue to contribute to development in the Korean Peninsula situation.

"China will continue to take its international responsibilities (to solve this issue)."

The foreign minister made his stance clear. China is and will not be afraid of any blackmail, and will not "yield to pressure", Wang said.

However, China is more than willing to solve the friction through peaceful negotiations.

There should be no "zero-sum game" in the international trade, Wang said, while emphasizing once again that all international members should strongly uphold multilateralism.

China's achievements since its opening up and reform:

Since the 40 years of China's opening up and reform, drastic changes have taken place. The country has been "worked hard, and forged ahead".

The country has successfully lifted over 700 million people out of absolute poverty. Moreover, an average growth rate of 14.5 percent year on year has been taken place in foreign investment.

The 73rd regular session of the UN General Assembly opened at the UN headquarters in New York on September 18, and the general debate opened on September 25.