CHINA War must be fought to deter invaders, Chinese nation will never cower before threats: Xi

War must be fought to deter invaders, Chinese nation will never cower before threats: Xi 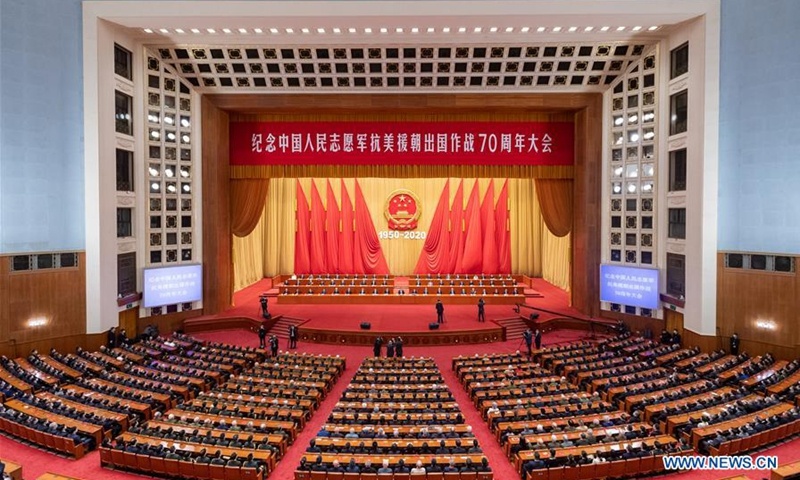 A meeting marking the 70th anniversary of the Chinese People's Volunteers entering the Democratic People's Republic of Korea to fight in the War to Resist U.S. Aggression and Aid Korea is held at the Great Hall of the People in Beijing, capital of China, Oct. 23, 2020. (Photo: Xinhua)

Chinese President Xi Jinping said that Chinese people will never sit idly by while China's sovereignty, security and development interests are undermined, and if such situations occur, they will certainly deal with them head-on.

Xi quoted late leader Mao Zedong as saying the Chinese people cannot be trifled with; and it is not easy to stop them once they are riled up.

It is necessary to speak to invaders in the language they know: that is, a war must be fought to deter invasion, and violence must be met by violence, Xi said, adding that a victory is needed to win peace and respect.

The Chinese nation will never cower before threats, or be subdued by suppression, Xi said.

Xi made the remarks at a meeting commemorating the 70th anniversary of the Chinese People's Volunteers (CPV) army's entry into the DPRK in the War to Resist US Aggression and Aid Korea in Beijing on Friday.

Attendees observed a moment of silence in tribute to war martyrs at the ceremony.

Xi said that China will never seek hegemony nor expansion, and is firmly opposed to hegemonism and power politics.

Pursuing unilateralism, protectionism and extreme egoism leads nowhere. Blackmail, blockades and extreme pressure will simply not work. Any act of hegemony and bullying will never work. It will eventually lead to a dead end, Xi said.

Xi said the great War to Resist US Aggression and Aid Korea defied the invasion and expansion motives of imperialism and safeguarded the security of New China.

The war also safeguarded the peaceful life of the Chinese people, stabilized the situation on the Korean Peninsula and upheld peace in Asia and the world, Xi said.

On October 19, 1950, as requested by North Korea, CPV forces crossed the Yalu River to aid in North Korea's fight. The CPV launched its first battle on October 25 against a battalion of Syngman Rhee's troops. In 1951, the Communist Party of China Central Committee decided to commemorate the war annually on that date.

On Friday morning, flowers baskets were presented at the Chinese People's Volunteers (CPV) army martyrs' cemetery in Shenyang, Northeast China's Liaoning Province, and the Memorial Tower commemorating the War to Resist US Aggression and Aid Korea, in the city of Dandong, bordering North Korea, on Friday.

Chinese analysts believed although without mentioning the US directly, Xi's speech actually delivered a clear message that the attempt by the US and any other forces to contain China will never succeed.

Yang Xiyu, a senior research fellow at the China Institute of International Studies in Beijing, told the Global Times that China has always attached great importance to commemorating the war as it was the first war that the New China was compelled to fight in order to safeguard international justice and national security.

The war's spirit is still relevant in today's world with increasing strategic instability, mounting risks of war and rampant hegemony of the US, Yang said.

Peace is not to be begged for; it is to be maintained by upholding justice and daring to struggle. By carrying forward the spirit of the past, we can preserve the peace that is more precious to us today, Yang said.