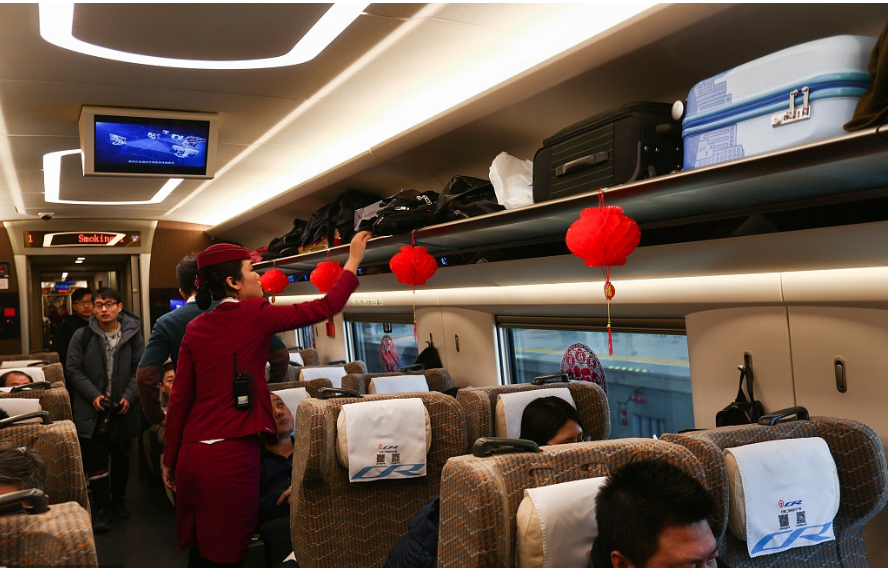 Train attendants checking luggage on board a high-speed bullet train from Beijing to Shanghai. (Photo: VCG)

Less than two weeks to go before the Chinese New Year. People across the country have begun making their way home by land, air and sea.

Here's a look at some stories of the journey home.

"Baby, look here!" yells a parent pointing to a temporary photo studio in the Hangzhou railway station, in east China's Zhejiang Province, where people can record their joy before heading back home.

"It's good to have a photo to record us at this moment when Spring Festival is approaching," said someone surnamed Shan, whose family have lived in Hangzhou for three years. They return to their hometown in Henan Province in central China every year during the Spring Festival.

Jiang Zhanyun is a volunteer photographer working at the studio.

"These migrant workers come to this city, working hard for the whole year. We help them take a photo as a souvenir," said Jiang.

In Zhulin Railway Station in southwest China's Yunnan Province, a couple has decided to make a high-speed train their marriage car.

He Xinqiang, the groom, said this is the most romantic thing he wants to share with his wife.

"The high speed rail is fast, convenient and safe so I choose to take my bride home in this way," said He.

Guo Tian is a railway worker in Nanchang City, in southeast China's Jiangxi Province. He works on a bridge and tunnel, securing the safety of train operations. He and his eight colleagues laughingly refer to themselves as the "Upper Cave Men."

"We have fastened that position on the wall. If not, it may drop when the train pass by, causing serious consequences like a roll-over accident," said Guo

Someone works on the ground and some work in the sky, all ensuring the safety of passengers. The air patrol team from Beihai Rescue Bureau are doing regular flyovers above China's Bohai Sea to ensure a safe travel rush on the sea.

"In stormy waters, cruise ships can't carry out their mission. At this time, flyovers by air patrol can guarantee the safety of vehicles," said a team member.

During the rush home, these stories are a good reminder to reflect on all the different faces along the journey back home.