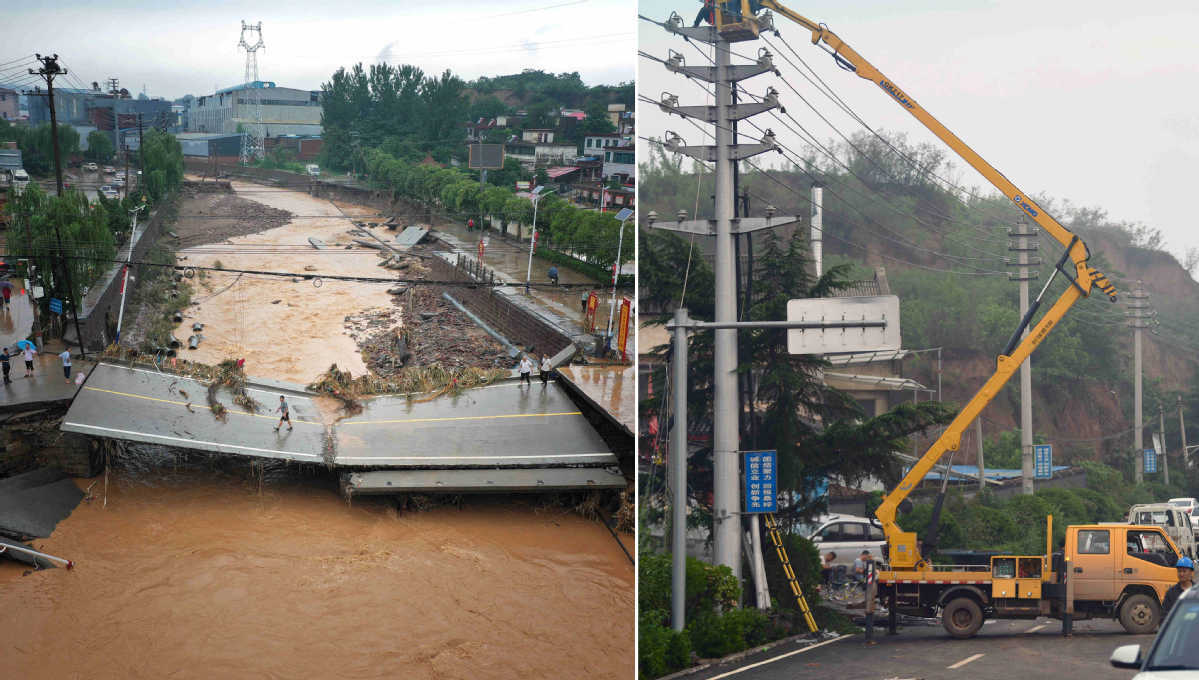 Many people have been trapped by floodwaters following heavy rain in Central China's Henan province this week, including the head of one city's meteorological bureau.

When torrential rainfall hit Gongyi on Tuesday, Zhao Jianbiao, the head of its meteorological bureau, was washed away in his car.

On Tuesday morning, Zhao went to the local government headquarters to report on the weather, providing important guidance for emergency management work.

But driving back to his office, he encountered extremely heavy rain and was swept away.

"I know the road between the city government building and my office like the back of my hand. It usually takes just 15 minutes by car," he said.

But the rainfall on Tuesday was extraordinary. Zhengzhou received 624 mm of rain from Saturday to Tuesday, almost equal to its annual average of 640.8 mm. Conditions in Gongyi were no better.

"As I was heading back, the rain became heavier," Zhao said. "In just a few seconds, my car was washed toward a drain, lower down in front of which was a small forest that was already in deep water."

Zhao's car started to float in the floodwaters and drifted forward. He broke one of its windows and clambered onto its roof, calling for help.

After two hours, a passerby noticed him. Zhao was rescued by residents that afternoon, but because his glasses had been washed away in the floodwaters he could hardly make out the faces of his saviors.

"[The passerby] noticed me and called 20 villagers to save me, using a long rope," Zhao said.

"My gratitude is beyond words. Without their help, I would hardly have survived."

At the home of one nearby resident, Zhao was given a change of clothes, food and warm water.

"It was the moment that I truly learned the meaning of the word warmth," Zhao said.

As of Wednesday, heavy rainfall in Gongyi had left four dead and seen 23,663 people relocated, according to the city government. Electricity and telecommunication services to 285 locations were cut off.

As a result, the meteorological bureau was unable to provide updates on weather conditions for more than 10 hours.

After being rescued, Zhao quickly returned to the bureau. He said its collection of weather data was unaffected because the observation station is built on top of a hill.

But the loss of electricity and telecommunication services made it difficult to pass the data to the provincial meteorological department.

"Repair work is still ongoing and the challenges don't scare us," Zhao said. "Currently, we've arranged workers to send messages to the provincial meteorological department to make sure the information can be relayed to the public in time."