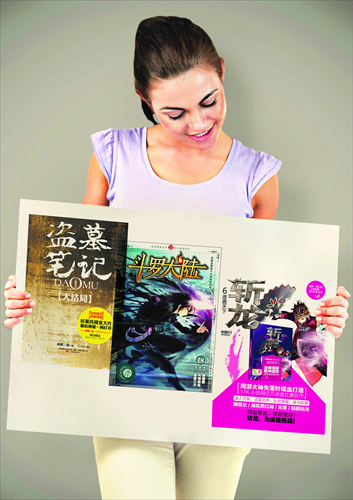 Thanks to recent growth in the number of online forums devoted to translating Web novels into English, China's online literature has seen major growth in overseas popularity. (Photo: IC)

Operators of online literature platforms in China have suspended or closed down channels in response to a national anti-pornography campaign, prompting some observers to hail the shuttering as a necessary move while backing a more sophisticated management system to take account of readers' ages. After the Beijing anti-pornography office declared its suspicion that Jinjiang Literature City was spreading pornographic and vulgar content, the site removed channels and launched a 15-day suspension of online updates for certain works. The webmaster of Jinjiang Literature City, one of the earliest and most influential cyber-literature websites in China, responded on Friday that the company has crafted a tougher examination standard.Ambiguous sexuality-oriented content would now be off limits, posted "Jinjiang Iceheart" on China's Twitter-like Sina Weibo platform.Jinjiang Iceheart called on writers for the website to explore "higher life goals for the main characters," and suggested that romantic writers pursue "a new non-sexual Platonic love mode." Online literature platforms have rolled out self-inspection actions to rid their sites of content suspected or deemed inappropriate and vulgar. Qidian Chinese novel website closed the accounts of 20 authors and suspended the "metropolis," "young woman" and "superpower" channels from updating for a week starting Tuesday, according to an announcement on its website. Zhu Wei, a professor at the China University of Political Science and Law, hailed the anti-pornography campaign as it was "very necessary" in response to platforms seeking profit from pornographic, violent or superstitious content.Unlike properly published books, online literature falls short of serious and responsible management and editing process, Zhu noted. The campaign would clear the internet of much harmful content for users of all age groups, he said.Judgment of sexual content in literature should be based on whether such content was integral to the plot and characters, sociologist and sexologist Li Yinhe told the Global Times on Sunday. Regarding the self-inspections by online literature platforms, Li said that adopting a "one size fits all" method to define all sex or sex-related content online as pornographic and vulgar was outdated and insensible.Behind thousands of romantic stories featuring sexual content is a substantial adult reading market and it would be entirely wrong to overlook and to deprive them of their reading rights, she said. The country should introduce a classification system for all reading materials, TV and film to protect the booming industries, Li said.