CHINA Wenchuan dam at risk of breaking due to heavy rains

Wenchuan dam at risk of breaking due to heavy rains 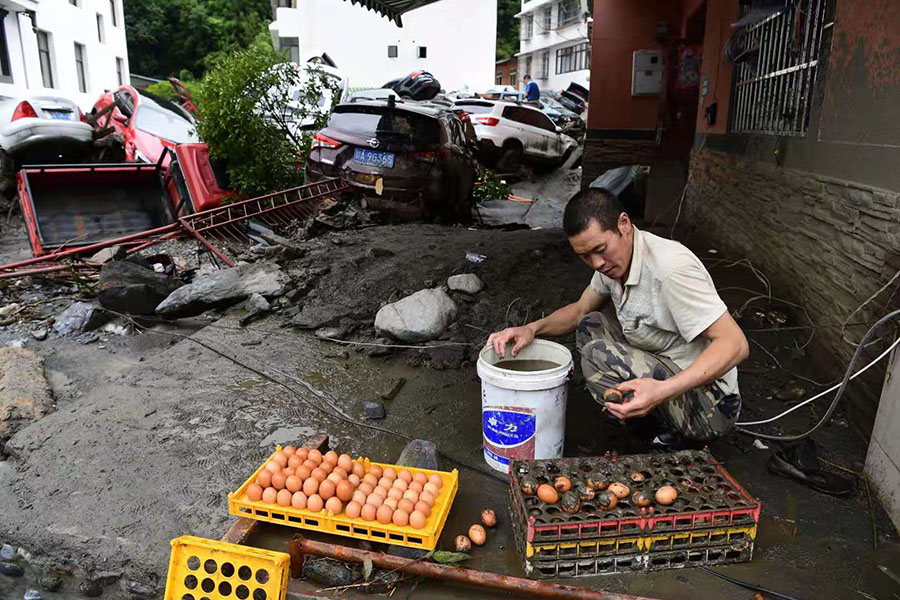 A resident sorts out eggs that had been buried in a mudslide in Gengda town of Wenchuan, Sichuan province, on Thursday. (Photo: China Daily)

A dam in Wenchuan, in Aba Tibetan and Qiang autonomous prefecture, Sichuan province, is at risk of breaking due to heavy rains, the Ministry of Water Resources warned on Thursday.

The dam, part of the Longtan hydropower station located at a tributary of the Minjiang River, lost power due to the rains, which caused its flood discharging gates to stop working after being raised only 1 meter on Tuesday.

The water level in the reservoir rose quickly and began to overflow the dam.

On Wednesday, the water level rose to about 4 meters above the normal level. This has overburdened the dam, and there is a chance it could burst, the ministry said in a news release.

Ninety-six people, including 54 tourists, were trapped upstream near the station due to the rising water level and collapsed roads near it after mudslides struck the area. Local authorities are making rescue plans to deal with the emergency.

According to the local water resources bureau, areas about 5 to 7 kilometers down from the station will be seriously affected if the dam breaks.

The ministry urged local authorities to analyze the impact of the possible flood and relocate people in areas that could be affected. People are not allowed to return by themselves until risks are eliminated.

The ministry said their options include forcibly opening the flood discharging gates or opening a temporary water channel for floods.

Ten people were killed and 28 were missing after multiple mudslides battered Aba on Tuesday, local authorities said on Thursday.

Rescue efforts are underway. The provincial emergency management bureau has sent 18 helicopters from King Wing aviation company to rescue people trapped across the prefecture and to deliver food and flashlights.