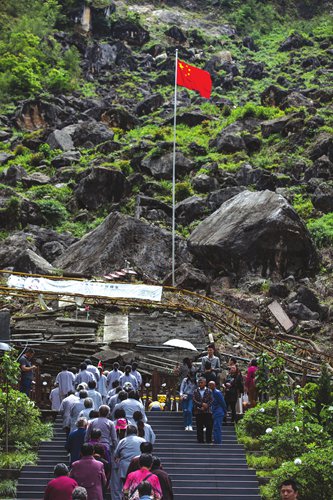 A Chinese national flag flies high on Friday on the site of the ruined Beichuan Middle School in the old sites of the Beichuan township, which was destroyed by an 8.0-magnitude Wenchuan earthquake on May 12, 2008. Tourists, Buddhists, victims' families and officials paid their respects to the victims one day before the anniversary. (Photo: Global Times/Li Hao) 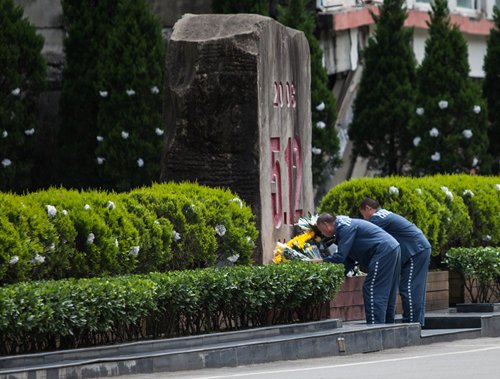 Two prisoners, natives of Beichuan, escorted by police, place flowers for their deceased family members at the monument located in the Beichuan earthquake site on Friday. May 12 is the 10th anniversary of the 8.0-magnitude Wenchuan earthquake.(Photo: Global Times/Li Hao)

On the 10th anniversary of the 8.0-magnitude Wenchuan earthquake, which took place on May 12, 2008, claiming more than 80,000 lives, tourists, Buddhists, victims' families and officials returned to old sites in the town to commemorate the tragic event.
At the old site of Beichuan township, situated in the northwest part of Sichuan Province, trees, moss and flowers have grown over the remains. During the earthquake, the entire Beichuan township was reduced to rubble and more than 20,000 people were killed or went missing. The entire township was later preserved as a memorial site and a new township was built 25 kilometers away.
Ten years on, roads and houses in the old town are still in the state they were in after the fatal quake. An Isuzu truck was halfway buried in the ground; rows of restaurants leaning to the side were propped up by steel pillars to prevent them from falling; clothes and Chinese knots dangling in the windows of houses. Railings were placed around the remains to separate them from the sidewalks that were installed for the visitors.
On a square near the New Beichuan Middle School, a few tourists bought flowers from a nearby stand and put them in front of a memorial. The old school was built at the foot of the Jingjia Mountain, which collapsed during the earthquake, causing 2 million cubic meters of earth and rocks to cascade, burying the entire school.
The tourists are mostly from nearby cities. One of them took photos of the remains, saying at first he didn't want to seem disrespectful but wanted this as a memento.
"Look, year after year, the loquat fruits continue to grow," he later said, pointing to a tree that grew out of the rubble.
Most of the locals usually come during the Qingming Festival in April to honor their deceased families, but a few could also be seen on May 12 every year.
A woman and her mother went around the railing and lit a candle.
The woman told the Global Times she was working in Mianyang, about 36 kilometers to the township, when the disaster struck. When she heard the news, she hurried back to the township because her father was there, but she wasn't allowed to get close to the rubble.
Then, every time the rescue soldiers dug out a body she would go up and see it, but in the end they never found the body of her father.
"I also felt regretful, because before the earthquake I had wanted to take my father to Chengdu [the provincial capital], but I didn't have the time," she said.
Another family brought their younger son to the remains of a school, telling him, "This is where they dug out your brother."
On Friday, a Buddhist group of more than 100 people from nearby Zitong county came to the remains to say prayers for the deceased. They gathered near the New Beichuan Middle School campus, chanting softly, "Namo Amitabha." At the end of the prayers, they took three bows to the remains.
At around noon, a police car quietly drove through the parking lot, and two prisoners from the Chuanbei Prison in Mianyang honored their families accompanied by a few policemen.
On May 12, roads into the old township will be restricted and only those with local IDs can drive through to pay tribute to their families.