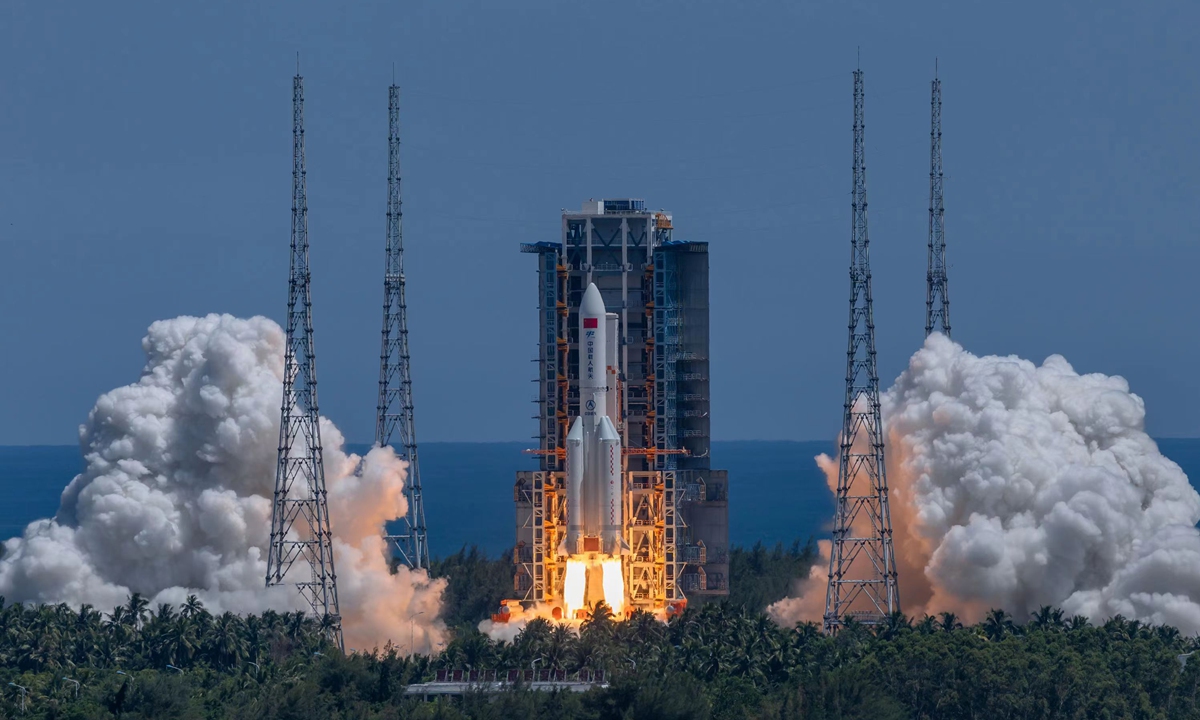 Right after China's successful launch of the Wentian lab module for the construction of the China Space Station, the Western media rapidly followed with a new round of smear campaign, hyping the "uncontrolled fall" of the Long March-5B Y3 carrier rocket's first stage.

Mission insiders at the rocket's developer and space analysts reached by the Global Times on Tuesday said that they were not surprised by such ignorant manipulation of facts, which projected once again the "sour grapes" mentality of the West toward the robust development of China's aerospace sector.

Media such as space.com claimed in its coverage of the Wentian mission that it was the third time that China "has opted not to control the disposal of the first stage of the Long March 5B rocket, once again putting China under scrutiny from space debris trackers after similar uncontrolled falls in 2020 and 2021."

Jonathan McDowell, an experienced tracker of these events at the Harvard-Smithsonian Center for Astrophysics, was quoted in these reports as saying that US Space Command orbital data is showing the 21-ton stage floating on its own.

"The inert ... core stage remains in orbit and was not actively deorbited," McDowell wrote on Twitter. McDowell added that Americans "do a rather better job of upper stage disposal, and China on average a worse one.

"So, I congratulate China on the successful launch of Wentian but deplore their failure to redesign the Long March 5B that sets us up for another major uncontrolled re-entry," the US astronomer told spacenews.com, further emphasizing his theory.

Commenting on these almost routine accusations, a mission insider at the rocket developer China Academy of Launch Vehicle Technology (CALT) told the Global Times on Tuesday that "There is no specific adjustment made to the rocket used in the Wentian launch in terms of the re-entry issues. And the mission was executed strictly in line with international practice, as the country always did in previous space launches."

The so-called Western experts should come back to reality, where the truth has proven to be the opposite of their accusations again and again, and they'd better do so, as we still have the Mengtian launch coming next, the insider said on condition of anonymity.

It was not the first time that the West has picked on the Long March-5B, a shorter variant of the country's strongest Long March-5 rocket type that has been deployed for China Space Station module launches.

The US made quite a fuss over the Long March-5B Y2 debris' re-entry in May 2021, when the rocket was commissioned to deliver the Tianhe core module.

CALT rocket designer Zhang Borong told the Global Times in May 2021 that the rocket adopted passivation technology that would not cause any explosion in orbit or create debris in space, and that rocket debris would be burned up by friction with the atmosphere, rather than smashing into Earth as in sci-fi movies.

Turning a deaf ear to repeated statements by China's space industry insiders and the Foreign Ministry that the probability of the rocket remnants causing harm was extremely low, a number of Western media outlets, including CNN and The New York Times, as well as the Pentagon and NASA, claimed during the Tianhe mission that the debris was heading back to Earth in an "uncontrolled" manner and criticized China for being "irresponsible" for the ocean landing.

The last round of the US-led smear campaign against Long March-5B was met with "slaps in the face," as the facts proved that the re-entry of the rocket remnants was harmless.

In fact, the China Manned Space Agency (CMSA) has regularly updated orbit data for debris re-entry of any rockets or spacecraft used for the China Space Station's construction, such as that for the Long March-2F rocket as well as the Tianzhou cargo spacecraft, which fully conforms to international norms in a rather responsible fashion, analysts said.

The CALT source told the Global Times that it saddened them that the Western world has adopted such obscurantism that it uses twisted facts to fool its people, citing another hyped report that said Tiangong Classroom sessions were filmed on Earth rather than in space.

"China ruled out the possibility of causing ground damage at the design stage, and its capability to ensure the re-entry safety has proven itself reliable again and again. What is behind such smears is total jealousy of us," Song Zhongping, a TV commentator who closely follows China's space program, told the Global Times on Tuesday.

The US is running out of ways to stop China's development in the aerospace sector, so smears and defamation became the only things left for it, Song noted. "But those efforts would be useless to affect the development of the China space program."