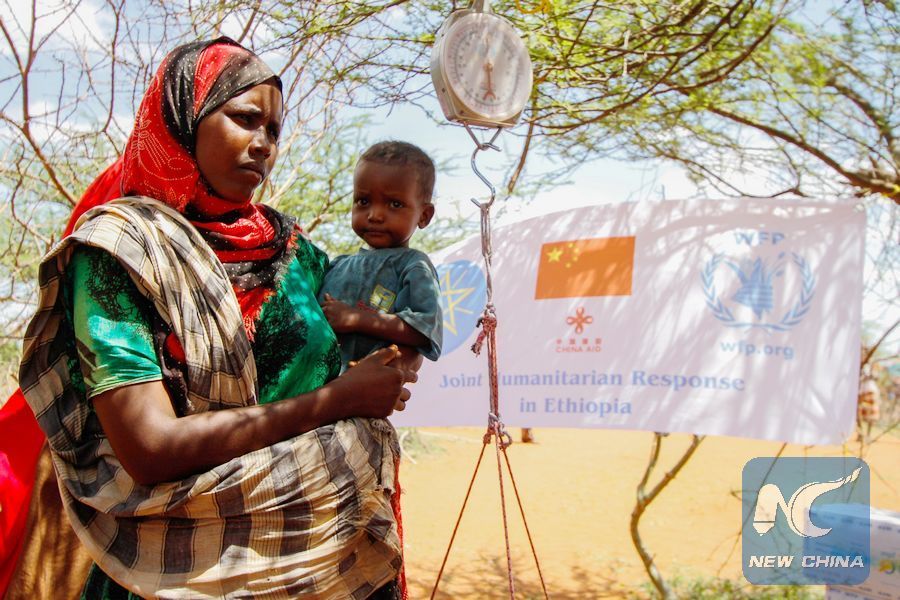 The UN World Food Programme (WFP) on Tuesday hailed Chinese humanitarian contributions to its programs in Ethiopia to support drought-affected people and refugees.

Paul Anthem, Head of Communications, Donor Relations and Reports Unit, WFP Ethiopia, in an exclusive interview with Xinhua said Tuesday that the World Food Programme has been receiving donations from the government of China for the past several years, especially for its relief and nutrition activities.

"The donations usually arrived at critical times when the country was in need of humanitarian assistance and millions required urgent nutritional support," Anthem said.

"The contributions directly benefited the poor who have been suffering from malnutrition," he said.

In four rounds of supports, through bilateral and multilateral channels, China has so far provided an emergency aid to Ethiopia totaling roughly 36.6 million US dollars, making it the third largest food aid contributor in the East Africa country, according to figures from Ethiopia's National Disaster Risk Management Commission.

The World Food Programme has been a major recipient of the humanitarian donation from the government and people of China, according to the Chinese Embassy in Ethiopia.

According to Anthem, over the past two years, the Chinese government has donated a total of 14 million dollars to WFP's relief and nutrition activities.

"WFP is always grateful to the Chinese government for its generous donations and stepping in to support the drought response in Ethiopia," he said, adding "Chinese donations have been instrumental in enabling WFP to achieve objectives at the times of the donations."

"It is expected that the Chinese government will continue to support WFP's humanitarian interventions," he said.

The latest humanitarian contribution of China in March this year, which amounts to 6 million US dollars, was used to assist refugees and drought-affected people in Ethiopia, according to WFP.

The 6 million US dollars came shortly after the joint appeal by the two UN agencies, WFP and the UN Refugee Agency (UNHCR), for 80 million dollars to provide food assistance to refugees in Ethiopia, the two UN agencies announced in a joint statement issued early March.

Noting the negative weather conditions that rocked the East African country since 2015, which includes the worst El-Nino induced drought in the past half century, Tan Jian, Chinese Ambassador to Ethiopia, also recently told Xinhua that the contribution is "a testimony of China's solidarity with Ethiopia."

Ethiopia also hosts the second largest number of refugees in Africa, resulting from large influx of refugees to the country due to instability and conflicts in its neighboring countries, mainly South Sudan, Somalia and Eritrea.

"China is a member of the international community and is ready and willing to extend our support within our ability. Our support is in the framework of the south-south cooperation," he said.

An estimated 7.9 million people in Ethiopia are currently in need of emergency food assistance, while Ethiopia also hosts more than 900,000 refugees, mainly from Eritrea, South Sudan, Somalia and Sudan.

Mitiku Kassa, Ethiopia's Commissioner for National Disaster Risk Management, in a recent interview with Xinhua said the assistance from the people and government of China "is not forgettable by the government of Ethiopia and the people of Ethiopia."

"I would like to thank the people and government of China for the four rounds of supports to Ethiopia over the last years for the drought response that we are working together," he said.