CHINA What happens in Hong Kong is violence, not ‘scenery’: FM

What happens in Hong Kong is violence, not ‘scenery’: FM 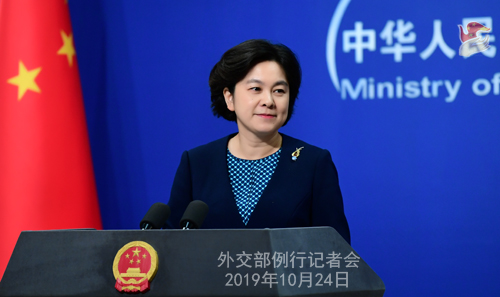 Hua was responding to questions about statements US House Speaker Nancy Pelosi on Wednesday said.

Hua said a few days ago, an American in Hong Kong wrote an open letter to the speaker, saying that what the western world sees about Hong Kong is not the truth.

“Some US lawmakers should be ashamed that they lied when they said they did not see the violence,” she said. “The vast majority of people in this city are living in fear, not because of what China has done, but because of what the protesters you support have done.”

Western politicians such as Pelosi confused right from wrong, turned the violent crimes into non-violent protests and supported violent demonstrators. Their hypocrisy and sinister intentions are ridiculous and despicable, she said.

The rioters smashed shops, vandalized public facilities, beat innocent citizens and even cut throats and used other extremely cruel means to endanger the lives of the police. These were 100 percent violence and crime, clear and unambiguous, she added.

“The ‘beautiful scenery’ you want, please enjoy it yourself,” she stressed. Chinese people don't want to share it.