White Paper on China and WTO: China to advance higher-level reform and opening-up 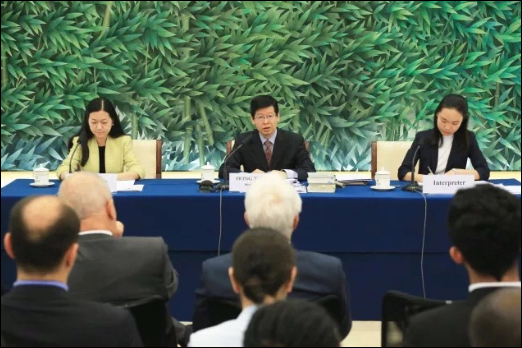 Hong Xiaodong, Director-General of the Department for WTO Affairs at China's Ministry of Commerce. (Photo: VCG)

This year marks the 17th anniversary of China's accession to the World Trade Organization. Over that period, China has been through rapid development and has made comprehensive progress by promoting reform and opening-up.

The Chinese government released a White Paper on China and the World Trade Organization on June 28. It states that China has faithfully fulfilled its WTO accession commitments and firmly supports the multilateral trading system.

During a briefing on the White Paper held in Beijing, Hong Xiaodong, Director-General of Department for WTO Affairs at the Ministry of Commerce, pointed out the progress China has made over the past 17 years.

“In 2001, as a new member of the WTO, we were a follower of international rules. And now we have grown to be a participant, and also, an upholder and contributor in the system,” Hong said.

Since acceding to the WTO, China has contributed about 30 percent to world economic growth. The country has substantively reduced import tariffs, lowered non-tariff barriers and liberalized the right to trade.

“It's very clear that imports are growing double the exports in China. That means China is increasing the opening of its market as a great opportunity to the world and to its partners,” says Diego Ramiro Guelar, Argentinian Ambassador to China.

Fulfilling WTO commitments has never been the end point of China's opening-up. The White Paper states that China will substantially widen market access for foreign investment and regulate outward investment.

“We certainly welcome these moves to continue opening China's economy. It's beneficial to China's and the world's economy,” says Elizabeth Peak, Minister Counsellor at the Australian embassy in China.

As is put in the White Paper, China commits itself to opening up wider and deeper, to promote common development across the world and to achieve greater mutual benefits.