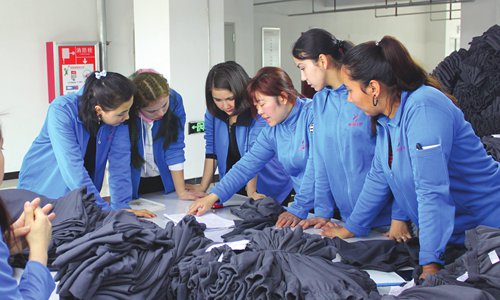 The publication of a white paper on vocational education and training in Northwest China's Xinjiang Uyghur Autonomous Region on Friday immediately drew heated discussions both inside and outside China, with many hailing the counter-terrorism methods China has used in the region.
"I have taken the general picture [of Xinjiang]. I think the white paper reflects the true picture of Xinjiang as far as I have witnessed," Daily Outlook Afghanistan's Hujjatullah Zia told the Global Times.
Zia visited two vocational education and training centers in Aksu Prefecture in southern Xinjiang this April and conducted in-depth interviews there.
"I think establishing education and vocational centers is one of the best ways to be copied from Xinjiang and applied in Afghanistan [to combat terrorism]," Zia said.
The white paper, published by the State Council Information Office, includes six chapters: urgent needs for education and training, law-based education and training, content of education and training, protection of trainees' basic rights, remarkable results in education and training, and experience in countering extremism.
Erkin Oncan, an Istanbul-based journalist who focuses on extremist movements in China and the Middle East, told the Global Times that the white paper "is one of the key documents for understanding China's policies in Xinjiang."
"This kind of document is important and instructive for other countries. Besides, being aware of the arguments and criticism against China, this white paper is the proper answer to the question 'What is China doing there?'" he said.
According to Oncan, the paper presents the facts, in sharp contrast to the accusations targeted at China by the West, which are based on rumors such as "unnamed" witnesses and unreliable satellite images.
"With the vocational education centers, China is separating the terrorists and the victims of terrorism and extremism. After this separation, China gives new lives to victims of terrorism and radical Islamism," Oncan said. "It should be understood that China's education centers are not a punishment system, it is a conversion system."
Zia said he had spoken to several individuals who had graduated from the vocational education and training centers. "They had very comfortable lives. I believe that the main objective for those centers is to protect the rights and freedoms of other citizens," he said.
Oncan pointed out that the Western countries should reflect on how many innocent people have died and how many families have been separated due to their anti-terrorism efforts. "The answer is countless," he said.
Li Wei, a Beijing-based anti-terrorism expert, told the Global Times that terrorism nowadays that uses religion as a disguise to spread extremism is deceptive.
"Based on the national and regional law and regulations, Xinjiang's counter-terrorism and de-radicalization work meets the benefits and demands of the broad masses of the people," Li said.
According to Li, China has made some outstanding achievements in de-radicalization. As the world is haunted by terrorism and extremism, some of the methods China has outlined in the white paper can provide a reference for other countries.
Muhammad Zamir Assadi, a journalist from Independent News Pakistan, told the Global Times that "the white paper has shown the consistent efforts of China for eradication of terrorism and extremism in the region, which has ultimately improved the peace and stability and lives of locals, as it has provided various opportunities for growth and development."
"The Chinese government is fulfilling its responsibilities in securing the dignity of ethnic groups so they can contribute to providing better lives for their families. China has made these achievements by applying effective measures," he said, adding that other countries can learn about China's policies and implement them with their own experiences and lessons.
In March, the 46th session of the Council of Foreign Ministers of the Organization of Islamic Cooperation adopted a resolution which commends the efforts China has made for Chinese Muslims.