WHO experts slam NYT for twisting, misquoting their words on virus origins probe 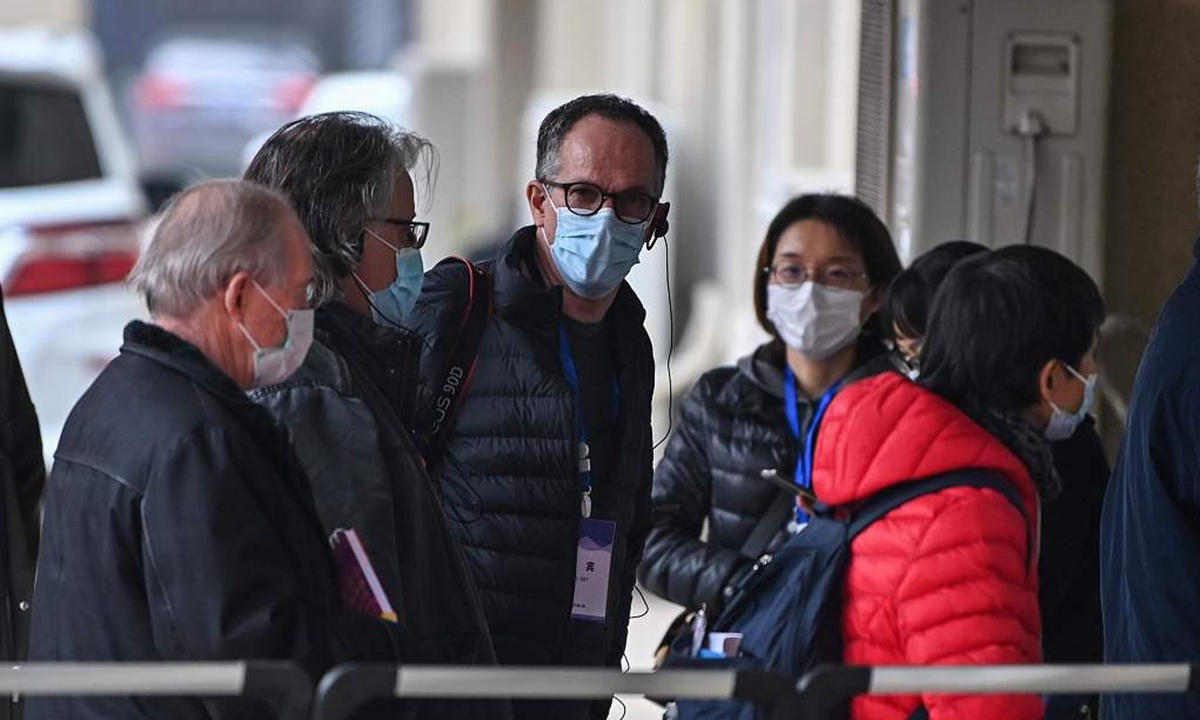 WHO experts who recently visited Wuhan slammed the New York Times for twisting their words and casting shadows over the efforts to uncover the origins of the virus, after the newspaper accused China of refusing to hand over sensitive data to WHO experts.

Chinese observers said they are not surprised by the New York Times’ baseless report given those in the Western media have insisted on politicizing the virus origins investigation.

The report by New York Times titled “On WHO Trip, China Refused to Hand Over Important Data” accuses China of failing to share important data that may help in identifying the origins of the virus and prevent future outbreaks.

After the report was published, two WHO experts slammed New York Times for misquoting them in the report to fit its own narrative, with the report casting a shadow over the scientific work of seeking for virus origin.

Peter Daszak, British zoologist and part of the WHO expert team, said on his personal Twitter that it’s shameful for New York Times to engage in selectively misquoting WHO experts to fit its own narrative. 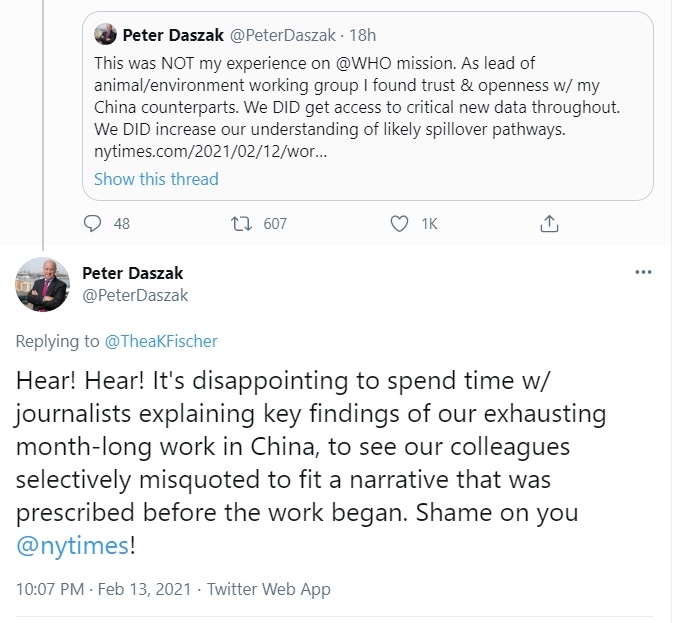 “Hear! Hear! It's disappointing to spend time w/ journalists explaining key findings of our exhausting month-long work in China, to see our colleagues selectively misquoted to fit a narrative that was prescribed before the work began. Shame on you @nytimes!” Daszak posted on Twitter. 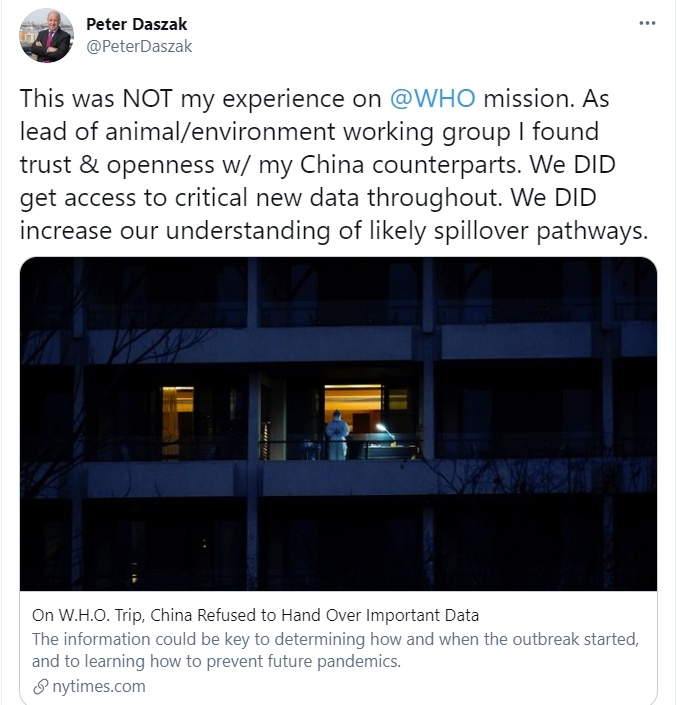 In sharp contrast to the NYT report, that has accused China of refusing to hand over important data, Daszak wrote on his Twitter that “We DID get access to critical new data throughout. We DID increase our understanding of likely spillover pathways.”

Daszak said his experience is nothing like the New York Times depicted and said as the head of animal and environment working group, he found trust and openness when working with his China counterparts. 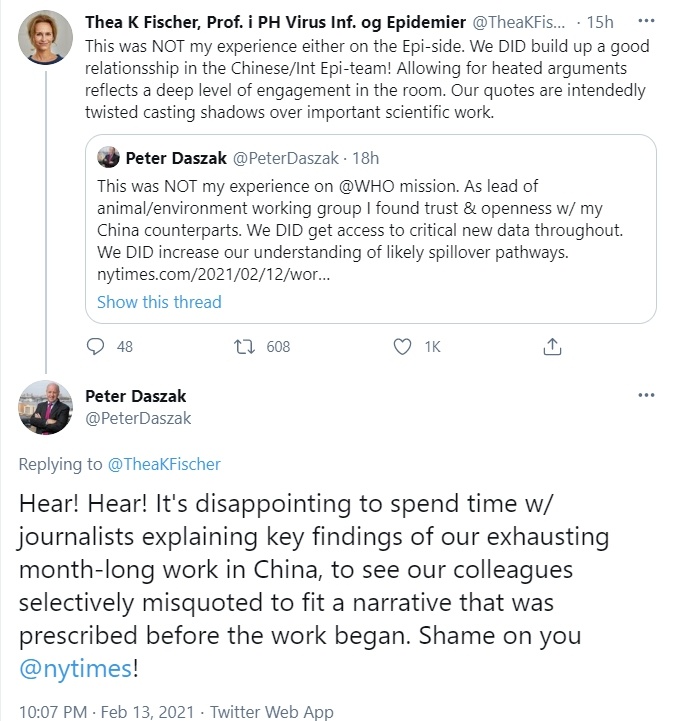 Thea Kølsen Fischer, a Danish epidemiologist on the team echoed Daszak, who was quoted by the NYT in the report, wrote on Twitter that “This was NOT my experience either on the Epi-side. We DID build up a good relationship in the Chinese/Int Epi-team! Allowing for heated arguments reflects a deep level of engagement in the room.”

“Throughout the WHO expert team’s trip in Wuhan, Western media’s goal had been to push their theories that China is guilty of causing the COVID-19 pandemic and hiding information,” Peking University professor Zhang Yiwu told the Global Times on Sunday.

As the results WHO experts released at the press conference were opposite to what the Western media were looking forward to, some Western media become so desperate that they made such false report, twisting experts’ words, to continue hyping their conspiracy theories about China, Zhang noted.

Countries that accused China of trying to hide information or prevent WHO experts from investigating would not even allow a WHO expert team to enter their countries to investigate, Zhang said, slamming their double standards.

On Twitter, Fischer also said it’s “important to stay true to facts if building up trust, calling to stop this negative spin about “no access to raw data.”

In the EU, the access of person-identifiable data is either not possible if without official permission under General Data Protection Regulations (EU GDPR), Fischer said.

Wang Guangfa, a respiratory expert at Peking University First Hospital, told the Global Times on Sunday that China has no interest in playing political games and that Western media is putting spin ahead of facts when it comes to China. “Truth will tell everything.”

“Virus traceability investigation is a scientific issue. It should not become a tool for political attacks and brings no good for the virus origin,” Wang stressed.

Tedros Adhanom Ghebreyesus, head of the World Health Organization, said at a briefing on Friday that the summary findings of the mission team would be released soon next week, with the full version of the report due for release in the following weeks.

After the WHO stated that all hypotheses relating to the origins of the COVID-19 pandemic remained open following the visit to Wuhan, Chinese experts and netizens called on the WHO to launch a broader probe mission on the origins of virus in other potential source countries.