CHINA Who is eligible to win the Medal of Friendship?

Who is eligible to win the Medal of Friendship?

Approved by Chinese President Xi Jinping, the first Friendship Medal of the People's Republic of China (PRC) will be awarded at the Great Hall of the People in Beijing on Friday.

President Xi will be on hand for the medal’s inaugural presentation where he will personally bestow the medal upon the winner.

According to China’s laws on national medals and honorary titles, the Friendship Medal is awarded to foreigners who make outstanding contributions to the country’s Socialist modern development, promote Sino-foreign relations and the world's understanding of China, and help maintain world peace.

By creating such a medal, China has provided the international community with a portal that will help them gain a better understanding of how the Chinese interpret friendship, peace, justice, and world equality.

Since only foreigners are eligible to receive the medal, and as the award ceremony coincides with the SCO Qingdao Summit, foreign dignitaries are asking one another, “Who will win the medal?” 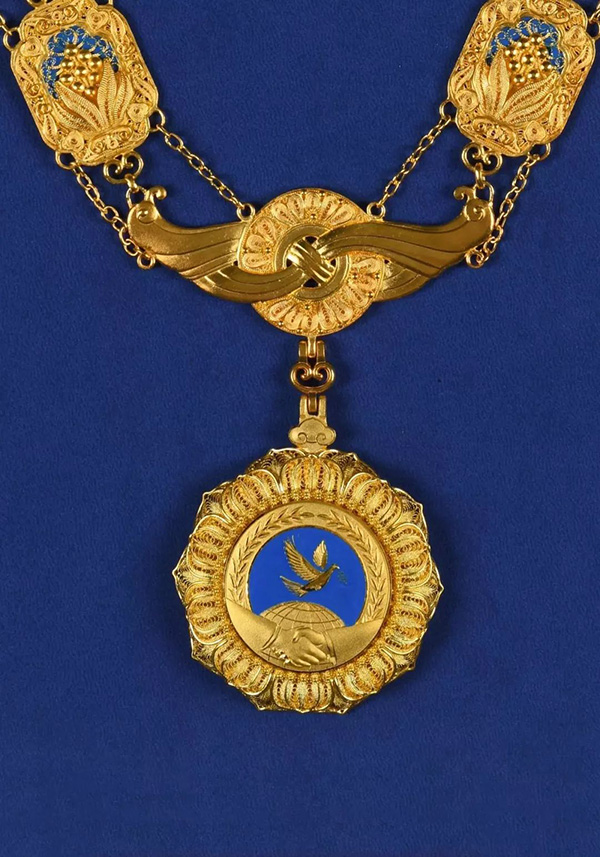 China’s Friendship Medal features a gold body and chain, with blue hues underneath in key locations and covered with meaningful symbols that complement its core themes.

At its center, a peace dove in midflight carries olive branches in its mouth set against a crisp blue background. An image of Earth and a lotus flower appears at the bottom of the medallion, along with a firm handshake between two people. Other significant characteristics include various Chinese knots, evergreens, peonies, orchids, and a jade disc.

Made with the finest filigree inlaid metals, the medallion is not only a prestigious award in terms of historical importance, but also representative of China’s high-quality craftsmanship and artisanal skills.

Overall, the medal is a symbol of friendship and solidarity reflecting the deepest wishes of all Chinese who continue to strive for a prosperous global development.

A brief history of the Friendship Medal

On January 1, 2016, as stipulated within China’s national medal and honorary title laws, the Friendship Medal was created with the distinction of being the highest honor a foreigner can receive in the country.

According to the law’s principle tenets, the President of the People’s Republic of China awards the National Medal of Honor and the National Honorary Title to the medal winners and issues the certificate in accordance with the decision of the Standing Committee of the National People’s Congress.

The law also stipulates that the President of the People’s Republic of China may directly grant foreign officials and international friends the Medal of Friendship in state affairs.

The Friendship Medal stands at the highest level of the Party and National honors recognition system. In addition, there are three other national medals, the Medal of the Republic, Qiyi Medals and Bayi Medals.