A student of Xuguang Middle School in Wuhan received a hand-written reply letter in Chinese from Gauden Galea, the WHO Representative in China on Tuesday. 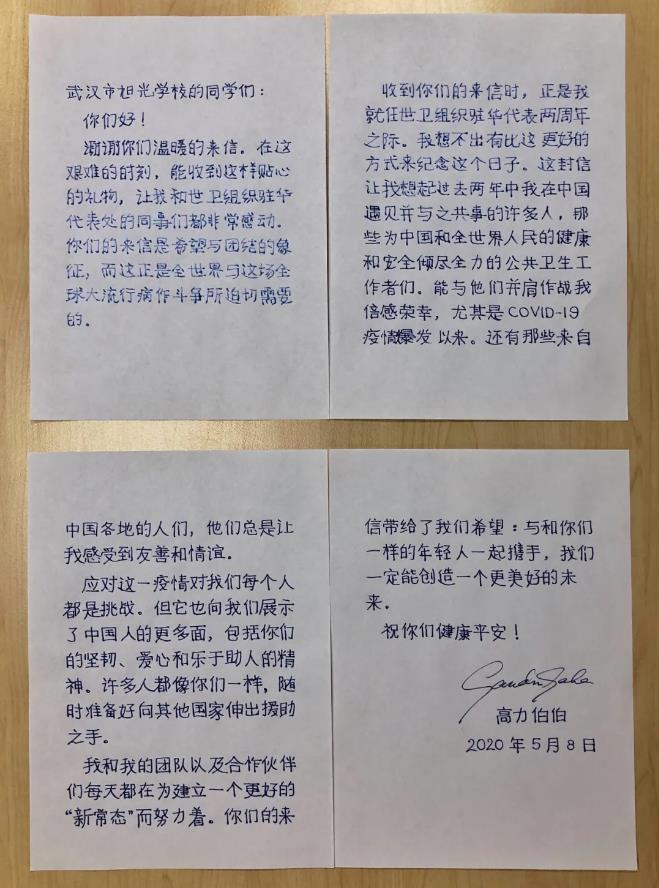 Photo of the letter sent by the WHO Representative in China Gauden Galea to a Wuhan student.

In the letter, Galea expressed his heartfelt thanks to the student who wrote him on the occasion of the second anniversary since he took office in China, crediting the letter as a symbol of hope and cohesion. He deemed it a great honor to work hand in hand with Chinese people who are always friendly, resilient, loving and willing to help other countries. At the end of the letter, he said that he has been working hard with his team to establish a better “new normal” and that with the joint efforts of young people, the future will definitely be better.

The letter was written on May 8 in reply to a student in Wuhan who wrote him on May 5 to express willingness to make classroom donations to WHO and call on young people around the world to join hands to help people in need.

Noting that the city hardest hit by the coronavirus has gradually returned to life, the student said in his letter that he recently went to a park together with his family and for the first time enjoyed cycling on the grass under trees since the COVID-19 outbreak and could feel "how hard-won the seemingly ordinary life is."

"The world is so huge, but no one is an isolated island and the virus is the common enemy of all the mankind," the student wrote, adding "My classmates and I have a common dream to contribute to a better world."