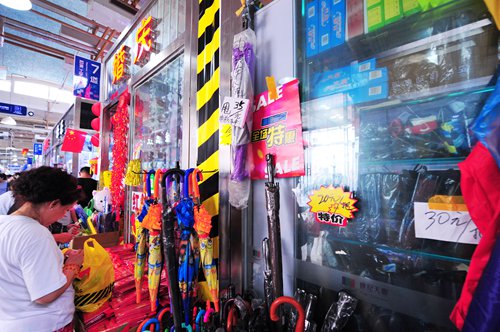 People shop in Shiji Tianding market near Beijing's Zhushikou subway station on July 28. The market has been open for 15 years but will be closed by the end of August, part of Beijing's plan to push out all non-capital functions. (Photo: VCG)

In less than two months, a number of wholesale market in Beijing will shut down, forcing the vendors to leave.The Guanyuan markets at the city center is a place to purchase gadgets and cheap daily necessities ranging from pens and clothes to bowls and electronics. "I will go back to my hometown after it closes," a 50-year-old vendor who has sold fashion accessories for about 10 years told the Global Times. "The capital doesn't welcome us. I have no options," the man from East China's Anhui Province said with a bitter smile.Many vendors reached by the Global Times noted that they are about to go back their hometowns, because running a small business in Beijing is becoming more difficult. The Guanyuan market is the last one left in Beijing's Xicheng district. It will shut down at the end of September forever.Twelve wholesale markets in the district with more than 20,000 vendors have been shut down since 2017, as part of Beijing's mission to focus strictly on "politics, culture, international communication and technology innovation." All other "non-capital functions" will be shifted out of the city.This is part of a strategic plan to coordinate the development of the Beijing-Tianjin-Hebei area, according to the Beijing Daily.The area around the Guanyuan wholesale market will be replaced by financial technology and service innovation companies. "The happiest moment in my childhood was that my father took me there for a toy. I also bought my first Double Star shoes there," a student said after hearing the news.The wholesale markets have become part of the lives of locals over the years, and the shutdown would create inconvenience for them, many believed, even though residents in Beijing have largely shifted to online shopping.Industry shiftIn addition, Beijing also has taken measures to close polluting factories, clear safety hazards by evicting tenants in illegal housing, and relocate hospitals and universities. Over the first half of 2018, Beijing has closed down 473 enterprises, 80 percent of which are manufacturing, wholesale-retail businesses and restaurants and hotels. A total of 122 markets and 15 logistics centers have been relocated or modernized. Some universities and hospitals are mulling a shift out of the city center, the Beijing Daily reported. By 2020, another 1,000 manufacturing businesses will be forced out of Beijing in order to reduce pollution, news site ce.cn reported on Monday.Beijing authorities did not say the move is to force the eviction of migrant workers, but experts say it does force them out of the city. The purpose of the changes is to rebalance the population and type of industries in Beijing, and pushing out mostly "low-end" industries is a result of this policy, Niu Fengrui, a research fellow at the Chinese Academy of Social Sciences' Institute for Urban and Environmental Studies, told the Global Times. Gone with these industries are the migrant workers. Beijing plans to cap its population at 23 million by 2020 to address "big city ailments," such as traffic congestion, pollution and an overly stressed infrastructure. Beijing's population of official residents increased 24,000 to 21.729 million in 2016, and the migrant population fell 151,000 to 8.07 million. It was the first time that Beijing's population has shrunk since 1997.Zhu Lijia, a professor of public management at the Chinese Academy of Governance, told the Global Times that Beijing needs people from all social levels and walks of life. Eviction of the migrant population cannot make the city better and create happiness for the rest, Zhu warned.Forcing out small businesses has also caused a lot inconvenience of local residents, Zhu said. Moving to Xiongan"Non-capital functions" currently in Beijing will be shifted to Beijing's Tongzhou district and Xiongan New Area in Hebei over the next three years.This is part of a three-year action plan issued by the Beijing Development and Reform Commission, according to news site ecns.cn on July 30. The plan will support the building of three new schools and one general hospital in Xiongan, and ensure progress at the Zhongguancun Science and Technology Park and the Beijing-Xiongan intercity railway.The commission said Beijing's outstanding education and medical resources, such as Beijing No. 4 High School, Shijiahutong Elementary School, Beihai Kindergarten and Xuanwu Hospital, will provide support to the new public services in Xiongan.The Xiongan New Area will attract resources from Beijing, which will alleviate stress on the capital. When industries shift out of Beijing and flow into Xiongan New Area, they will attract people from Beijing, Niu noted.