CHINA Why China is best positioned to help Afghanistan reconstruction

Why China is best positioned to help Afghanistan reconstruction 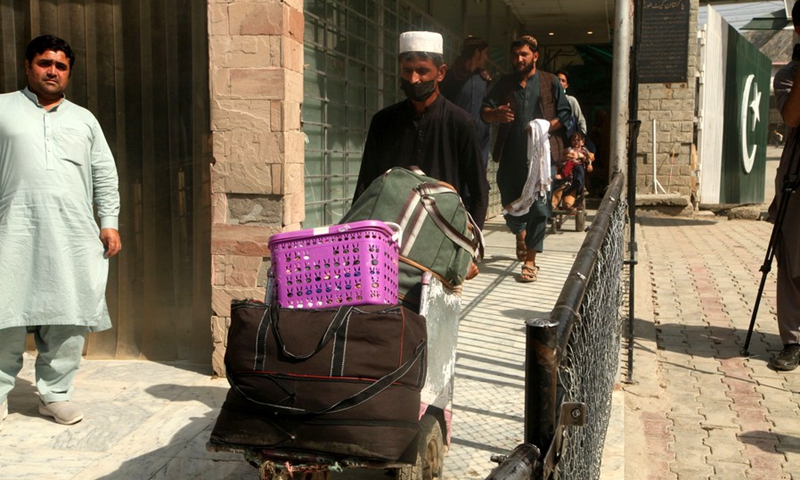 Afghan people cross the border at a border crossing between Pakistan and Afghanistan, in northwestern Pakistan's Torkham, on Aug. 22, 2021. (Photo: Xinhua)

While the shock over the US' astonishing failure in Afghanistan continues, global attention has been shifting to the newly empowered Taliban's plan to rebuild the country from the ruins left behind by the US military invasion, with Taliban officials vowing to start rebuilding the country. Considering all the profound uncertainty and difficulties the country faces, China has emerged as arguably the best partner that could help the country's reconstruction endeavors going forward.

For both the war-torn country and the Taliban, the most pressing task, apart from restoring order and stability, is starting to build the country's backward and severely damaged infrastructure from widespread power shortages to broken roads and bridges.

US President Joe Biden has stated that the US' "mission in Afghanistan was never supposed to have been nation building" and is weighing further sanctions to cripple the Afghan economy.

The situation remains fluid in Afghanistan and there are a litany of challenges and risks before any such cooperation can move ahead, including security risks, policy uncertainties and lack of funding, but once the situation stabilizes and a new government starts the rebuilding efforts, China's ability to maintain political neutrality, close coordination with relevant parties and secure diverse funding sources will help mitigate risks that many countries cannot, analysts noted. China's close coordination and shared interests with Russia will also play a major role in potential rebuilding efforts in Afghanistan.

In a short video clip posted by the Taliban spokesperson Suhail Shaheen on Tuesday, workers were busily working on a road construction, sending a clear message to the world that the new regime is on track to build the country.

Chinese companies and officials have already made clear their intention to help the Afghanistan to rebuild the country. Chinese foreign ministry spokesperson Wang Wenbin told a regular press conference on Wednesday that China stands ready to continue to develop good-neighborly, friendly and cooperative relations with Afghanistan and play a constructive role in Afghanistan's peace and reconstruction, said Wang.

An employee with China's leading construction company Sany Group told the Global Times on Wednesday that they may consider investing in Afghanistan when the situation is stabilized and clearer.

The company is doing business in over 100 countries and regions and played a significant role in the infrastructure development of both developing and developed countries, especially those along the Belt and Road.

Chinese domestic investors realized a direct investment of $18.61 billion in 58 countries along the Belt and Road in 2020, increasing by 0.3 percentage points compared with the previous year under the background of a 35 percent year-on-year decline in global outward direct investment.

Another pressing issue for Afghanistan and the Taliban to address immediately after the situation stabilizes is power shortages.

This is also an area where China will be the best partner. An employee with the Power Construction Corporation of China (PowerChina) told the Global Times on Wednesday that although they have no projects in Afghanistan at the moment, there is a possibility for them to participate in the future projects, especially related to hydroelectric and thermal power sectors in which they are leading the world in both technology and capacity.

As a world-leading power construction company, PowerChina has projects in many countries and regions including in neighboring countries such as Pakistan under the Belt and Road Initiative, including the fifth expansion project of Tarbela, Pakistan's largest hydropower station, which has created more than 3,000 jobs. The installed power capacity will account for 25 percent of Pakistan's national installed power capacity once completed and put into operation.

Such examples can be adapted in Afghanistan, said the person.

As the World Food Program of the United Nations has already warned of acute food shortages facing the country, agricultural cooperation is a critical area for cooperation between China and Afghanistan.

The Afghan economy has not made much progress over the past 20 years under a US-controlled government, and agriculture is largely abandoned, meaning one-third of its food is imported. In the meantime, opium production in Afghanistan was 6,300 tons in 2020, accounting for about 85 percent of the world's supply.

China is the world's largest agricultural country, able to feed 1.4 billion people, a miraculous achievement in human history, so it can play a part in helping Afghanistan with expertise and technology for irrigation and planting that can enable the country to make the best advantages of their uncultivated land, industry insiders said.

However, before this cooperation can move forward, there are still challenges, including the political and security uncertainty, lack of clear policies and plans as well as the lack of funding for such massive projects.

The lack of funding might last even after the political situation stabilizes. The US has already seized Afghanistan's US assets and is in discussions to impose sanctions. The World Bank has also halted funding for projects in Afghanistan after the Taliban seized control of the country, a move that came just days after the International Monetary Fund suspended payments to Afghanistan, media reports.

The Taliban will need to address many of these risks and challenges, especially political stability and security, immediately before it seeks to rebuild the country.

"Despite the regime change, the political situation is still unstable, and some rebel forces and warlords have not been fully resolved, so China needs to wait and see if it can participate in the construction," Liu Zongyi, the secretary-general of the Research Center for China-South Asia Cooperation at the Shanghai Institutes for International Studies, told the Global Times on Wednesday.

But once the overall political and security situation is stabilized, China, with its expertise in building massive infrastructure projects overseas, especially in developing countries, can help mitigate certain risks and challenges, including maintaining political neutrality in coordination with all parties and securing diverse sources of funding.

With China's advocacy of a community with a shared future for mankind and the concept of win-win cooperation, China will bring peace and construction to the Afghan people and build a better homeland for them, experts said.

Chinese foreign ministry spokesperson Wang Wenbin reiterated on Wednesday that China has always respected the sovereignty, independence and territorial integrity of Afghanistan, followed the policy of non-interference in Afghanistan's internal affairs and adhered to a friendly policy for all the Afghan people.

Many of China's infrastructure projects in countries along the Belt and Road have faced various difficulties, including political shifts in local partner countries and lack of funding, but China, in close cooperation with local governments, has overcome those risks and challenges.

One example is the Peshawar to Karachi Motorway (PKM) project, the largest infrastructure project under the China-Pakistan Economic Corridor, a significant example of how China's project helps countries with its development. The length of the PKM project is 392 km, with the design speed of 120 km per hour.

Another example is the China-Maldives Friendship Bridge, which opened on August 30, 2018 with Chinese assistance. As the first ever cross-sea bridge in the Maldives, the 2,000-meter-long bridge connects Male, capital of Maldives, with Hulhulé Island where the international airport is located.

Many Western companies had reportedly studied the Friendship Bridge project for years, but they never started construction because of the technological and funding difficulties, but Chinese firms completed the project with technological breakthroughs, low interest loans and joint operation contracts.

Apart from China's own building expertise, the country's close coordination with other major powers helped mitigate potential risks and challenges. In the Afghanistan situation, China and Russia have maintained close communication and have shared interests in peace and development in Afghanistan, which makes the two countries the main players and partners in Afghanistan's rebuilding efforts, in stark contrast to the US' intention to sow chaos in the country.

Experts said there is huge potential for cooperation in rebuilding Afghanistan, and China, with its advanced technology and economic strength, is definitely a leading player in the construction of Afghanistan.

While China can play the leading role in carrying out specific projects with its building capabilities and funding sources, Russia can offer crucial support in such projects with its massive influence in both Afghanistan and the region in ensuring stability and security in the region.

Experts said that China and Russia are among the countries that most sincerely want peace and development in Afghanistan, even as the US and some other Western countries continue to seek to undermine that.