Editor's note: Jimmy Zhu is chief strategist at Fullerton Research. The article reflects the author's opinion, and not necessarily the views of CGTN. 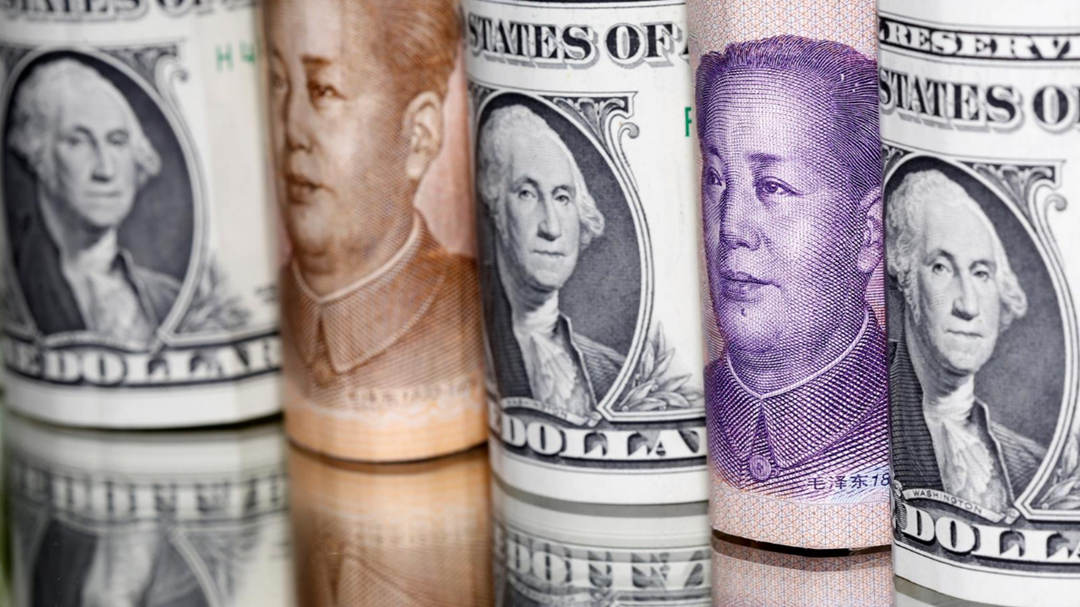 Banknotes of Renminbi and the US dollar. /Reuters

The onshore Chinese yuan has gained around 1 percent so far this month and broke the key 6.40 level against the U.S. dollar, heading for the best month since May this year.

Both domestic and external factors suggest the currency may have the scope to move higher, even with the Fed to potentially announce the quantitative easing (QE) taper plan next week.

Since the beginning of the year, Chinese yuan has gained over 2 percent and its performance ranked No. 1 among all the major currencies in Asia.

One of the main domestic factors behind the gains is the resilient exports growth. Since October 2020, China's exports growth gained more than 10 percent each month, and its trade balance hit the historical level of $634.9 billion.

The higher demand is also leading to a stronger yuan, because when exports are more than the imports, there is a high demand for its goods, and for the Chinese yuan.

After the Chinese central bank reformed its currency regime to be more market-oriented, balance of trade has been playing a significant role to influence the yuan's value.

Since the CFETS RMB Index (an index to value the yuan against a basket of currencies) was introduced in late 2015, its correlation with China's trade balance has reached 0.65.

Still, the soft dollar before the Fed is set to announce the QE taper plan surprised many investors, as the currency gained substantially before and after the Fed introduced the QE taper in 2013. The dollar index has dropped about 0.6 percent since the end of the third quarter.

Take note that dollar index is an important factor to drive the yuan value, and correlation between the dollar index and USD/CNY was at 0.82 in the past five years.

The greenback may have scope to further drop from the current levels because the Fed's tightening pace has been so far lagging with many other central banks in developed economies, such as those in the UK, Australia, New Zealand and Singapore.

This is very different from the global situation in the previous Fed's tightening cycle, when most of the major global central banks were still in the easing cycle.

Compared to many other central banks, the Fed's current monetary policy is considered as quite dovish. According to Taylor rule model, the Fed's policy rate should be at 6.6 percent based on the current inflation and labor market conditions, highest among all the major central banks' policy rates.

Taylor rule is a formula that can be used to predict or guide how central banks should alter interest rates due to changes in the economy. For example, Taylor's rule recommends that the Fed should raise interest rates when inflation, employment levels or GDP growth rates are higher than desired.

Thus, the value of dollar is quite fair to reflect the current Fed's stance on monetary policy, which is in no rush to tighten or raise the rates even with persistent inflationary pressure.

Indeed, the inflation pressure in the U.S. is the highest among all the G10 countries at this moment. Its Consumer Price Index (CPI) has been persistently above 5 percent in the past months, while no other economies in G10 group has achieved such levels so far.

But some central banks may raise the rates much earlier than the Fed does, including the Bank of England, Reserve Bank of Australia and New Zealand's central bank.

But the Fed doesn't look at hiking the rates any time in the near future, and Powell's latest speech on October 22 showed his stance on monetary policy remained patient on raising interest rates.

Monetary policy decisions and interest rates are also important factors to decide the exchange rates, because the yield difference has been always influencing the foreign capital flows. For example, if the gains in UK bond yield are faster than those similar assets in the U.S., the pound-denominated bonds may attract more inflows, pushing the pound higher.

Overwhelming demand of gold amid stagflation is another factor driving the dollar lower, given their highly negative correlation over the long run.

The real 10-year yield based on U.S. CPI currently stands at -3.9 percent, suggesting investors might have looked for other alternatives, including gold, to protect their assets value against the inflation.

If the stagflation environment is to stay, gold price levels may be stabilized at current levels or even go further higher, and that may continue to suppress the value of dollar.