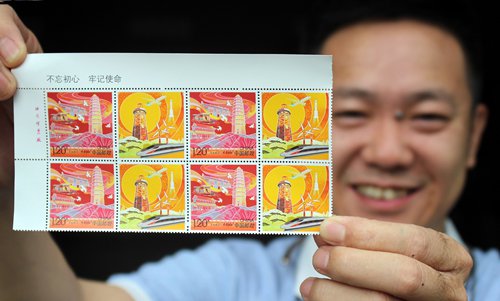 A philatelist in Suzhou, East China's Jiangsu Province shows off a set of new stamps depicting the establishment of the Communist Party of China (CPC) on Sunday. China Post issued the stamps to mark the 97th anniversary of the founding of the CPC. Photo: VCG

A video of the oath of allegiance to the Communist Party of China (CPC) is being widely circulated on Chinese social media, and is one of many commemorative activities held in China to celebrate the 97th anniversary of the founding of the CPC on Sunday.
Released by China's military website 81.cn, on Saturday, the three-minute video of the 80-word oath had been viewed more than 100 million times as of Sunday, according to People's Daily.
Chinese cities held multiple activities ranging from holding commemorative conferences and live performances to live-streaming Party lessons and visiting patriotic education bases.
A live-streaming Party lesson was held online in Zhejiang Province's Jiaxing on Thursday, which was attended by more than 10,000 Party members, according to Jiaxing Daily. Jiaxing also released a proposal to prompt "red tourism" in China.
Inner Mongolia Autonomous Region staged a themed quiz show on Saturday night, with the participation of eight groups including official departments, universities and banks, news portal people.cn reported.
Commemorative activities were also seen among private enterprises. China's e-commerce company Suning Holdings Group held a conference on Saturday to praise Party members and organizations. The conference was attended by more than 13,000 Party members employed by the company, China News Service reported.
The wide-ranging celebrations are affirmation of the Party and its role in leading China, Su Wei, a professor at the Party School of the CPC Chongqing Committee, told the Global Times.
"Party members feel so proud as it is the Party's first anniversary celebration following the 19th National Congress of the CPC. Chinese citizens are showing more support for the CPC than before," Su said.
Zhuang Deshui, a professor of Peking University, told the Global Times on Sunday that he felt this year's celebrations on the birth of the CPC were "quite lively."
Celebrating the Party's birthday will awaken people's consciousness of the Party and enable people to resist potential risks, he said.
The CPC should continue to earn public trust by strengthening anti-corruption and improving the work style of the Party. The public trust will support the central government to cope with social conflicts and provocations from foreign nations, Su said.
In 2017, the CPC recruited 1.98 million new members, 71,000 more than 2016, including 1 million members working on the frontline production posts, accounting for 50.8 percent of all new members, according to the Xinhua News Agency.
The CPC had 89.56 million members and 4.57 million primary-level Party organizations at the end of 2017, the Organization Department of the CPC Central Committee announced Saturday.