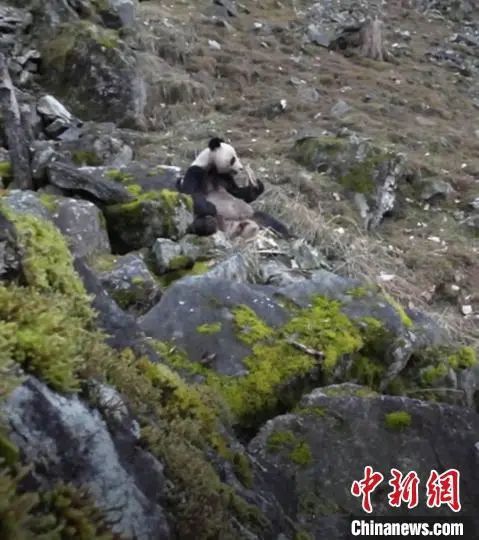 A wild giant panda has been caught on camera gnawing at the bones of a dead takin, an animal similar to a goat antelope found in in Northwest China's Shaanxi Province. This species of bears, whose ancestor was omnivorous, is believed to sporadically eat dead animals after it was forced to change its diet to bamboo.

While counting the number of giant pandas in a field population survey, ranger Li Shuiping and a team from the Foping National Nature Reserve in Shaanxi, took the pictures of a wild giant panda gnawing on the bones of a takin, Xinhua News Agency reported on Saturday.

"When we found the panda, it was less than 50 meters away from us. There is no bamboo forest on this large mountain slope so we were wondering what it was eating as we kept observing," Li told Xinhua.

Li mentioned that the "thing" the wild panda was eating turned out to be "the bones of a dead takin that were more than a foot long."

"The panda enjoyed its food for about 10 minutes before it dropped the bones and walked slowly into the woods on the hillside and climbed up a big tree," Li said.

Researchers also found that the feces of the panda after eating meat were also different from the usual bamboo diet.

The feces of pandas that usually eat bamboo are called "qingtuan" like the traditional Chinese green rice dumpling. The China Academy Science (CAS) Chengdu Branch explained that they named the droppings after the food for the shape and "fragrance of bamboo."

As they collected feces samples they found that, compared with the droppings of the common giant panda, the color of these clusters was gray and white, like a "spindle-shaped lime stick," according to the report.

This is the second image of a wild giant panda captured eating meat in the Foping National Nature Reserve.

Still, bamboo occupies 99 percent of the catering habits of wild pandas and only in rare cases would they eat meat, according to the CAS. A proper explanation for this sudden meat-eating behaviour is that the animal needs "to absorb other nutrients the body requires when necessary," Sun Quanhui, biologist of the World Animal Protection, told the Global Times on Sunday.

Originally carnivore, this species was forced to change its diet to bamboo to adapt to the changing climate and habitat. Yet, experts say that its digestive system still "retains the traits of a carnivore, just like their ancestors."

"Wild pandas mainly prey on the remains of a wide range of dead animals," mentioned Li Sheng, researcher at Peking University and expert at International Union for Conservation of Nature, adding that there had been several records of wild pandas "eating meat occasionally" in areas around the Qinling Mountains.