SHIJIAZHUANG, Oct. 10 (Xinhua) -- The residents of Chongli, a previously impoverished district in Zhangjiakou, north China's Hebei Province, once saw snowy days with annoyance until a stroke of serendipity came about. 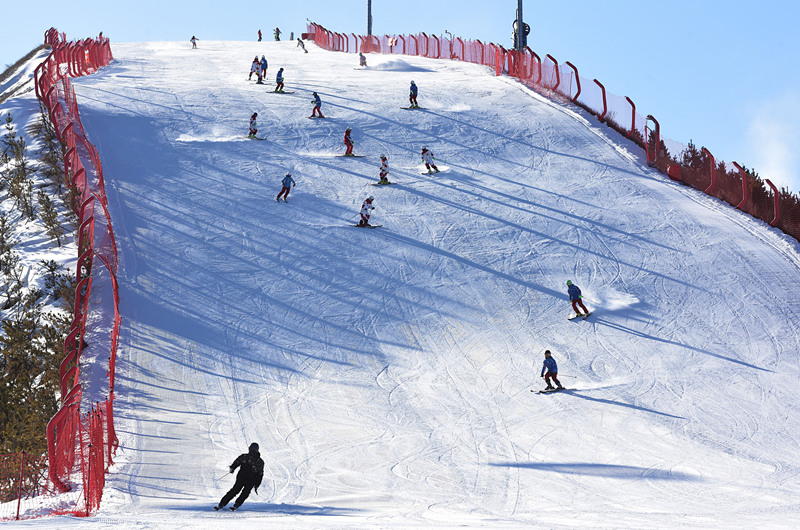 "Thick snow on the ground made it difficult to push open the door of the house, let alone the biting cold," said Qian Xuesen, 58, a local resident.

Located some 220 km away from Beijing, Chongli receives an annual snowfall of 63.5 cm on average, with more than 150 snowy days every year.

In 2015 after the district was announced to be one of the venues for the 2022 Beijing Winter Olympics, Qian and other residents soon realized the once troublesome snow has become a treasure.

As the construction work of the Winter Olympics venue progresses in full swing, the village has been blessed with an unexpected development opportunity.

Isolated by a huge mountain, the Shangwopu Village, where Qian lives, has a meager population of over 300. "I used to live in an adobe house, where winters were tough to endure," Qian said.

In 2016, the local government decided to relocate villagers as part of its poverty alleviation efforts, as well as to develop the ice and snow tourism sector in the rural area. Within three years, 132 households, including Qian's family, moved into new houses provided free of cost. Green belts flanked orderly near the hardened roads in this small village.

Apart from improved living conditions, villagers now have more income, thanks to the ice and snow tourism.

Since 2016, Guo Baoying, a 61-year-old villager in Shangwopu, has worked in a snowfield for over five months in the slack farming season every year. "My monthly salary has increased from 1,800 yuan (about 270 US dollars) to 2,600 yuan," said Guo.

According to the local government, nearly a quarter of the 126,000 population of the district directly or indirectly serve the snowfields.

"When I first came here, there were only three ski resorts, and now the number of large ski resorts in Chongli has surged to seven," said Gao Peng, deputy secretary of Zhangjiakou skiing association, who also opened a travel agency in 2014.

Chongli received 2.81 million tourists, earning 2.05 billion yuan during the snow season from 2018 to 2019, data from the local tourism bureau showed.

Meanwhile, the urban construction of the district has witnessed a great leap.

Ten years ago, there was only one street in Chongli, but clean and wide streets are now lined with European-style buildings.

In 2019, Chongli was named one of 52 tourist destinations worth visiting by the New York Times. As the Winter Olympics approaches, the area is becoming more and more international.