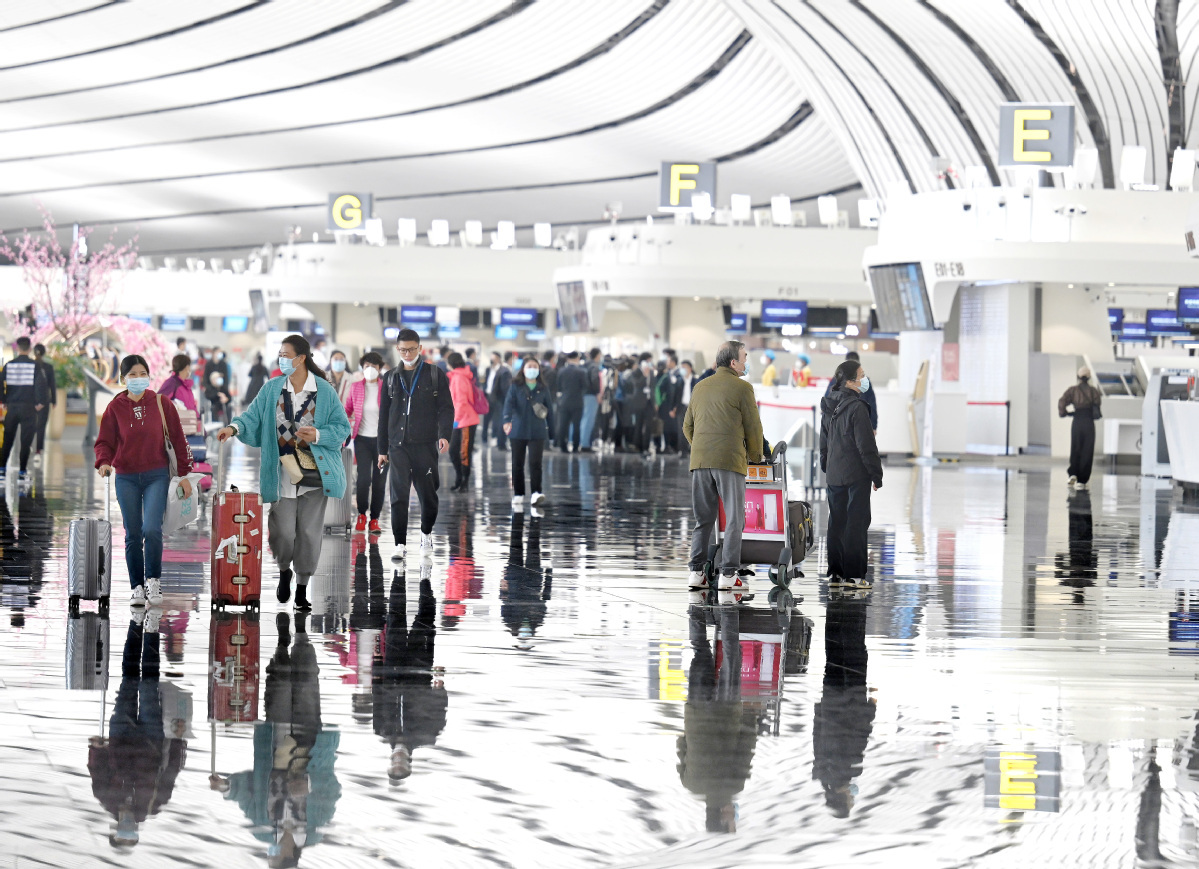 Passengers depart from Beijing Daxing International Airport on Sunday. The airport will see an average of 853 flights a day in the winter-spring season. (Photo: China Daily)

More domestic air routes will operate during winter and spring as the COVID-19 pandemic sharply curtails the international market.

About 200 airlines from China and overseas have scheduled 94,809 passenger and freight flights every week, the Civil Aviation Administration of China said.

According to the plan, 86,735 domestic passenger and freight flights－excluding those servicing Hong Kong, Macao and Taiwan－will operate every week, a year-on-year increase of 20.2 percent. Of those domestic flights, 84,634 will be passenger flights.

The CAAC said the winter and spring schedule began on Sunday and will end on March 27.

Beijing Daxing International Airport, the capital's new airport, will handle 853 flights a day, 103 more than during the summer and autumn season, said Zhang Peng, a manager at the airport's operations management department.

During the new season, the airport plans to handle 153 air routes, including 145 domestic ones, and about 140,000 passenger trips will be handled at the airport every day.

Beijing Capital International Airport, China's busiest airport, plans to handle 1,054 flights a day, 86 fewer than during the summer and autumn season. The new airport will ease the pressure on Beijing Capital and help improve flight schedules to enhance punctuality.

All flights operated by China Southern Airlines in the capital are now being handled at the new airport.

China Southern, one of China's three major airlines, plans to operate about 2,500 flights a day during the new season, including more than 400 from Beijing Daxing to more than 40 domestic destinations.

China Southern operated about 250 to 260 flights from Beijing's two airports every day during the summer and autumn season, said Hu Haiqing, deputy head of its Beijing branch.

"The airline has increased flights between the capital and the (Guangdong-Hong Kong-Macao) Greater Bay Area, such as Shenzhen and Guangzhou, Guangdong province. Passengers do not need to think about the flight schedule (to the Bay Area)," Hu said. "We offer them enough choices to ensure that whenever they arrive at the airport, they can quickly catch a flight."

He said about 60 flights are planned every day between Beijing Daxing and Guangzhou, with a flight leaving Beijing Daxing for Guangdong's provincial capital every 30 minutes during peak hours.

Air China, the national flag carrier, plans to operate 1,287 domestic flights a day, an increase of 22.5 percent compared with the previous winter and spring season.

Li Xiaojin, a professor from the College of Economics and Management at the Civil Aviation University of China in Tianjin, said although the pandemic has sharply curtailed international flights, the domestic market has recovered and is expected to match last year's level by the end of this year.

He said some airlines that focus on the domestic market, such as Spring Airlines and China Express Airlines, have seen passenger traffic surpass last year's level.

Yu Zhanfu, partner and vice-president for China at consultancy Roland Berger, said China's civil aviation industry has been recovering since May, and passenger volume in the domestic market has almost reached last year's level.

He said the domestic market has played a more important role because international flights have been limited due to the pandemic.