CHINA With mature anti-epidemic system, nightmare of 2020 Spring Festival 'will not return'

With mature anti-epidemic system, nightmare of 2020 Spring Festival 'will not return' 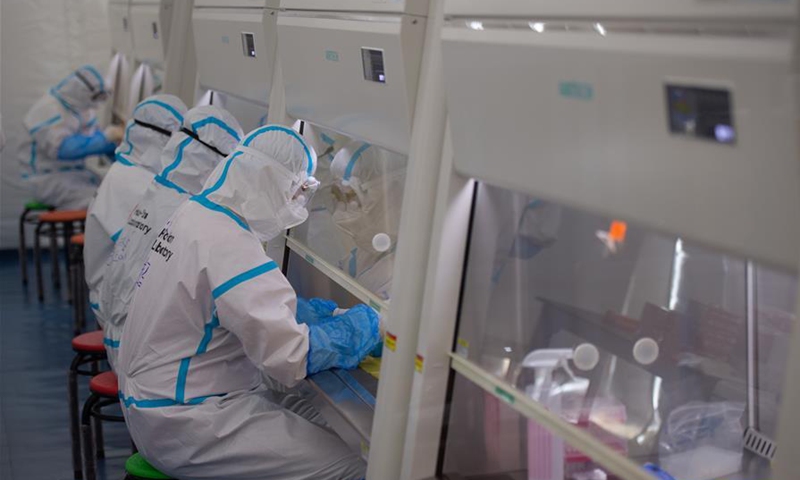 Beijing on Sunday beefed up citywide measures against COVID-19 over concerns that the country's mass travel during the upcoming New Year holidays may trigger a new wave of infections, after the municipality reported 13 cases in three districts during the past two weeks of unknown source.

All districts, government departments and companies are required to enter a state of emergency to deal with the sporadic COVID-19 cases with a more resolute attitude and more stringent measures.

Also on Sunday, many Chinese cities announced the cancelation of countdown activities, firework displays and dinner parties, or have imposed travel restrictions for the upcoming New Year holidays.

With more countries reporting new coronavirus cases related to new variants of the novel coronavirus over the weekend, which has prompted the world to tighten curbs, it is evident that there is a global consensus on the need to fight the COVID-19 pandemic this winter.

Chinese health experts and the public are confident that well-policed customs and an organized medical system, more experienced provincial and city governments, improved tactics to track close contacts and well-organized mass nucleic acid testing procedures are all guarantees in the country's fight against the latest threat.

But the country cannot relax its efforts due to anti-virus fatigue and still needs to endeavor to bring sporadic cases under firm control while not allowing the process to impact daily economic and social life, they warned.

Right now, sporadic cases were detected in Dalian, Northeast China's Liaoning Province, Beijing and Shenzhen in South China's Guangdong Province. As of Sunday, 10 communities in Dalian and three communities in Beijing have been upgraded to the medium-risk category.

Communities and villages where confirmed cases were reported are under close management. New recruits in the catering industry and supermarkets will be required to undergo nucleic acid testing before they start work from now on, Beijing officials announced at a press conference on Sunday.

During the upcoming New Year festivals, the number of visitors to Beijing's parks, scenic areas and indoor public places will be limited to 75 percent of normal capacity, according to the press conference.

Public venues such as theme parks and churches have scaled back their operating hours. Some churches in Beijing, including St Joseph's Church in downtown Wangfujing, have stopped admitting churchgoers and halted group activities. Baiyunguan or the White Cloud Taoist Temple in Beijing, the largest Taoist temple in North China, closed on Saturday. Beijing's largest amusement park, Happy Valley, announced it will close at night from Monday, and its New Year's Eve event will be canceled as well.

The Global Times found Beijingers are feeling nervy in recent days. Across the city, supermarkets, shops and other public venues have pasted the QR codes again at their entrances, requiring visitors to register and show their green QR health code before entering. Checking body temperatures and wearing masks are obligatory.

Some areas in Beijing are in a race against time to test people and screen for potential infectious cases. More than 234,000 people in Chaoyang district were given nucleic acid tests as of Sunday, and the results were all negative.

The situation in Beijing now is much severer than a few weeks ago, Zeng Guang, chief epidemiologist of the Chinese Center for Disease Control and Prevention, told the Global Times on Sunday. Authorities should adjust their epidemic prevention and control policies in accordance to the new situation, for example, by calling on the public not to leave Beijing unless it is necessary or urgent, he said.

Beijing is now facing more challenges in fighting these sporadic cases, especially when the source of some of them is unknown, unlike the outbreak in June in Xinfadi wholesale market, where the infection source was easily detected, Zeng said.

Beijing officials said they will insist on regular anti-epidemic measures and deal with outbreaks in certain localities and industries where the epidemic is more severe, such as in tourism, the catering industry and museums and cultural centers. Tracing the source of the virus should be the top priority, and whole-genome sequencing comparison of the virus should be carried out promptly.

Asked whether the epidemic is out of control in Beijing, Wang Guangfa, a respiratory expert at Peking University First Hospital, told the Global Times on Sunday, "The epidemic in Beijing is not only far from necessitating a lockdown, nor is it coming to a complete halt. The Chinese government will minimize the effect on local economy."

Wang warned that "a single spark can start a prairie fire," calling on local officials to track the source of infections in a swift way, but he said Beijing does not need citywide testing at this moment.

"Identifying more potential virus carriers among high-risk groups should be the top priority. If people continue to observe hygiene rules and wear masks in public places, there is little chance they will get infected," Wang noted.

Countdowns, firework displays and dinner parties have always been a highlight of New Year's Eve and Chinese Lunar New Year holiday seasons; however, many cities announced that they are canceling planned activities.

In addition to Happy Valley in Beijing, Happy Valley park in Chengdu, capital of Southwest China's Sichuan Province announced it will close at night from Monday, and its New Year's Eve event is canceled.

Canton Tower in Guangzhou, Guangdong Province will not hold a countdown event. Some scenic spots in Suzhou and Nanjing, both in East China's Jiangsu Province, also said they will not hold any festive events on New Year's Eve. To avoid crowds gathering, Hanshan Temple in Suzhou will livestream an event to sound the New Year bell, a traditional activity that has lasted for centuries.

Northwest China's Shaanxi and Northeast China's Liaoning provinces have requested people to cancel or not participate in group events, festive activities or dinner parties during the holidays. They are encouraged to hold online events instead.

Zeng said that as China has accumulated a year of anti-epidemic experience, it can counter the current sporadic outbreaks and is unlikely to see the same situation as the one the country faced at the beginning of 2020.

Jin Dongyan, a professor at the School of Biomedical Sciences at the University of Hong Kong, also believes the Chinese mainland is capable of preventing another outbreak similar to the scale of Wuhan.

But still, Zeng, the Chinese epidemiologist from the CDC, warned of risks during the upcoming Spring Festival.

"No city should lower their guard. We are still in the middle of the war to fight the virus," Zeng said.

"At the same time, we need accelerate the emergency use of vaccination and approve it for general use as soon as possible to cover high-risk groups," he said.