CHINA Woman not slim and fair shoots to phenomenal stardom with LGBT, feminist fan base

Woman not slim and fair shoots to phenomenal stardom with LGBT, feminist fan base 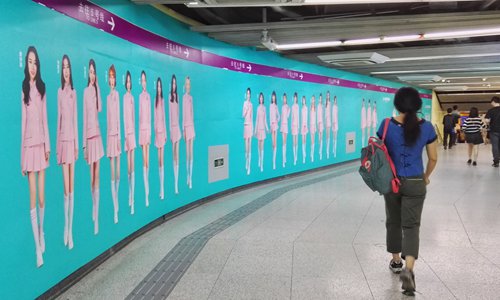 A passenger looks at a billboard featuring Tencent's reality show Produce 101 at a subway station in Beijing. (Photo: IC)

Over the past week, Chinese netizens have been bombarded with photos, slogans and jokes about Wang Ju on social media, a not-so-pretty reality show contestant according to girl-band criteria. Even those who are insulated from entertainment shows have found it hard to avoid her.

But when Wang first made an appearance on Produce 101, an online pop idol-making reality show by tech giant Tencent, she instantly became the laughing stock of China.

The show, an authorized remake of a Korean show of the same name, first premiered in April. It brings together 101 contestants to compete with the guidance of celebrity mentors for the chance to join a girl group. Throughout the show, the contestants practice singing, dancing and even song-writing.

When Wang first appeared on stage, she wore black overalls that exposed her round waist.

The dark-skinned, stout 25-year-old wore heavy makeup, especially the eye liner, which made her look like a Western diva. Her hair, dyed gray at the tips, flipped out at her shoulders. She also wore exaggerated, round earrings, looking ambitious and even aggressive.

She was surrounded by what one might expect of a girl group: slim women with large round eyes, sweet smiles and innocent expressions. She instantly received comments from fellow contestants for being "oppressive" and "not very girly."

The audience thought the same, hoping Wang would get booted from the show and even creating memes to mock her. However, last week she miraculously turned the game around, jumping to first place in popularity and winning millions of fans because of her candid personality, independence and ambition, the very reasons many wanted to vote her out in the first place.

Some even say these qualities won vast support from the LGBT community and feminists.

When Teng Hao first started watching the show, he wasn't paying too much attention to Wang. The young editor at fashion and entertainment news app Ping Fang was scouring for story ideas from the show, but at first only noticed the contestants with amazing dance skills.

Over the following weeks he was bombarded with news about Wang, who had been eliminated from the program at the very beginning for not matching up to the level of her peers. However, she was brought back later and given a second chance. Since then, her popularity has been climbing nonstop, reaching first place last weekend.

Wang's fandom has since developed its own subculture, complete with unique jargons. They have inside jokes, gave themselves a playful name Tao Yuanming, a poet who lived almost 2,000 years ago famous for his love of chrysanthemum - referring to her first name, the Chinese word for the flower.

They even gave a name to those who are not familiar with Wang but have been bombarded with her news, calling them juwairen, or outsider, skillfully working in her first name as part of the pun. Many have started writing rhyming couplets and using memes in praise of Wang and canvasing for votes.

"I think Wang Ju can single-handedly take on Thanos," a netizen commented early in May, after the first few episodes were aired, making fun of Wang's figure. But three weeks later, the same netizen posted again, "I hope Ju can have a perfect ending, but the important thing is she tried!"

Some from China's LGBT community named Wang a "gay icon." In an article published by LESDO, a WeChat public account with an emphasis on lesbianism, the author proposed that everyone should live like Wang: free, unique and independent.

Xiaotie, director of the Beijing LGBT Center, said it is understandable that the Chinese LGBT community would like this kind of idol, because the community looks up to someone who can be oneself.

"But it's not only the LGBT community; women with independent minds also prefer someone with personality. Take myself for example; after I became independent, I didn't want to dress cute anymore. Teaching a woman to be cute is teaching her to be ignorant, so she cannot be stronger to explore on her own."

Wang's uniqueness stems not only from her appearance, but more so from her personality. Whether spontaneously or intentionally, she was presented on the show as independent, ambitious and confident.

During the program, she said in an interview, "I don't think I'm totally without talent, but why is it that my talent cannot match up to others' appearances? Why is it that the audience can deeply remember and like you just because you look pretty?"

Teng, the fashion and entertainment editor, said an idol like Wang can strike a chord with the audience. "She can be herself, without any inhibition," he said. "I think most of us live in a set image of who we should be."

He also praised Wang's ambition, saying people who have worked understand that kind of attitude. Her understanding of independence and her interview on the show also surprised him.

The quality Wang displays during the program also coincides with the shifting attitude of China's young generation, their inner desire to stop all pretenses and be real.

A netizen explains the reasoning behind picking Wang in detail on Weibo. "At first, it was a sense of challenging tradition, 'Why should we pick a traditional girl group?' Then gradually, we realized that Wang Ju's attitude is the same as ours, we don't want to be a traditionally defined 'good kid.'"

"We vote for Wang Ju, but we are also voting for ourselves. We are not idolizing her, we are creating a spokesperson for ourselves."

In the latest episode aired last week, Wang's team sang a rap song praising the independence of Hua Mulan, an ancient poetic figure that Disney turned into a popular cartoon in the 1990s, about a Chinese woman who went to war dressed as a man in the stead of her father. "You don't have to put a ring on me, I can buy my own … My life is in my own hands," Wang sang.

Such rhetoric plays well with China's modern-day young generation, especially women, who react strongly to stereotypes and discrimination and who are not afraid to voice their concerns publicly, experts say.

In the past, mainstream publicity may have advocated for Chinese women to be sweet and innocent, perhaps to be taken under the wings of men. But as feminism awakens, such personalities seem out of date.

Last month, when superhero movie Avengers 3 played at theaters in China, it was exposed on Weibo that one Wanda movie theater repeatedly broadcasted a movie-viewing guideline that said, "To all the women: don't ask your men the superheroes' names, please just quietly eat popcorn and drink Coke, don't disturb your men's happy hour as he pays pilgrimage."

The broadcast aroused controversy. Women protested online, calling for the theater to apologize, saying anyone can enjoy superhero movies regardless of gender. Wanda finally pulled the message and apologized.

Some argue that this is the only reason Wang rose through the ranks so rapidly. "She has her own opinions, can provide entertainment value, understands the audience, knows how to be different," Yansubagua, an entertainment blogger, criticized.

"But if Wang didn't have her 'golden quotes,' if she only showed the audience her performance on stage, would they find her this charismatic?"

For most people, they simply turned the worship of an unorthodox idol to a carnival.