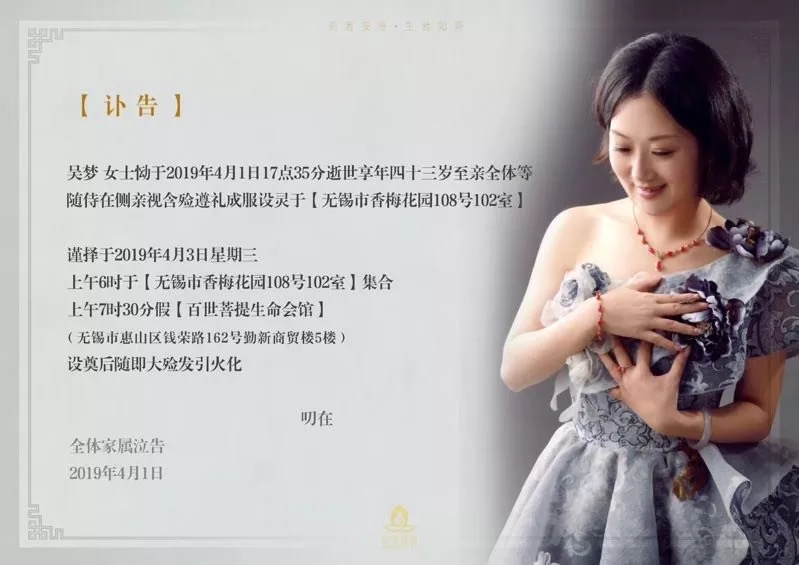 A woman - desperate to give birth despite incurable diseases, which triggered nationwide debate last summer - died on Monday at the age of 43 due to lung infection less than 10 months after delivering a son, eastday.com reported.

Later, Wu met her current husband Wang Keding, who had two children from his first marriage. As her disease forbids her to bear children, Wu told Wang that she wouldn't marry him unless she was pregnant. But at the age of 42, she got pregnant. She considered it God's wish, so the two were married and decided to give birth - even though it could cost her life.

Doctors' dissuasions couldn't change her mind. She even published a video online, saying if she could give birth successfully, it would bring hope to all pulmonary arterial hypertension patients.

On June 16, doctors from different departments at Wuxi People's Hospital successfully delivered a boy under extracorporeal membrane oxygenation support. The childbirth was a heavy burden on her body. She suffered from cardiopulmonary failure and sudden cardiac arrest. Eleven days later, she went through a cardiac atrial septal defect repair and lung transplant.

Her surgeon Chen Jingyu said he didn't feel happy after completing the world's first lung transplant on a postpartum woman with pulmonary arterial hypertension. Due to professional ethics, the doctors tried their best to save her life and decided to take a chance on a heart and lung operation after childbirth. From his point of view, she took the hospital and doctors hostage in the name of love.

In December, Wu was hospitalized due to infection. Her condition stayed unstable, and her weight dropped to 30 kg. They planned another lung transplant, but her physical condition had deteriorated too much.

Wu was moved back home on Monday and died that day.

Her husband said that he didn't expect such an ending. "If I knew this would be the result, I wouldn’t have let her give birth," he said.

Chen explained her cause of death on his Sina Weibo on Tuesday. He said Wu was an extremely confident woman. She didn't follow doctor's advice and refused to take anti-infection medicine after a lung transplant, which resulted in another lung infection.