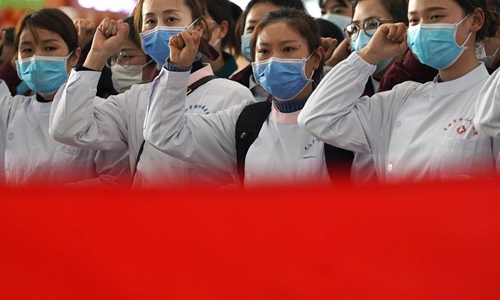 In China's battle against the novel coronavirus epidemic, women have shown their powerful will, professionalism, selfless devotion and great resilience alongside their male peers.

As of Feb. 2, about 3,476 female medical workers from around the country had been dispatched to central China's Hubei Province to assist in combating the epidemic, according to the China Medical Women's Association. FRONTLINE DEVOTION

Before departing for Wuhan, Liu Lu, a nurse at the provincial people's hospital in east China's Jiangxi, had her shoulder-length hair cut.

"Looking good is no longer important at this moment, I must be responsible for the safety of my patients and myself," said the 30-year-old.

She was assigned to the third treatment group at the Wuhan No. 5 Hospital, where she knew no one and could only identify her colleagues by the nametags on their heavy hazmat suits.

Liu works in the newly opened area for infectious diseases. "Everything here is new and unfamiliar, except the bustle and tension," she said.

Liu takes a shift of four hours every day, and getting dressed and undressed from her hazmat suit takes another two hours. She usually wears five layers of clothes under the gown, but still, she feels freezing sitting inside the unheated ward. But when she moves, the air-tight gown soon makes her sweat.

After a day's work, when she takes off her mask, her face is left with blood-red marks, and the skin of many of her colleagues is irritated with zits. Many of them cry out seeing themselves in the mirror.

On the fifth day of her arrival in Wuhan, she submitted an application to join the Party. "No matter how long the fight will be, I will proceed without hesitation," she said.

The novel coronavirus had claimed 722 lives as of Friday on the Chinese mainland and sickened tens of thousands more, with Wuhan, the source of the pathogen, hardest hit.

Liu is among the 88 women in the first batch of 138 medical staff from Jiangxi to assist Wuhan, according to data from the Jiangxi Provincial Health Committee.

Female medical staff accounted for about half of the frontline personnel involved in the fight against the epidemic in Jiangxi Provincial People's Hospital. Among them, there are 11 nurses working in the isolation wards and 20 in the fever clinic.

And among the second batch of 101 medical workers from Jiangxi to assist Wuhan, 97 are women.

The same can be seen in hospitals across the nation and almost all the departments involved in the combat against the virus. GRASSROOTS MOBILIZATION

To control the spread of the novel coronavirus, many Chinese cities have adopted a community-based prevention and control system, which can relieve the pressure on hospitals, block the transmission source and prevent cross-infection. And the majority of the grassroots workers are women.

"Community is the cornerstone of epidemic prevention and control," said Zhao Yongmei, secretary of the Party Committee of the No. 3 Community of Gongrenxin Village in Shenyang, northeast China's Liaoning Province.

"We carry out door-to-door registration, conduct regular visits, report timely information to the local government and post notices in every neighborhood," she said.

During the Spring Festival holiday, Zhao, along with seven other female peers, worked late into the night every day.

In Wuhan's Chang'er Community, Jianghan District, there are 3,104 households of 7,333 residents. Its community committee, however, has only 16 staff members, and 14 of them are women.

"I take dozens of phone calls every day, and sometimes over 100," said Hua Qing, head of the Chang'er Community Committee.

Hua said the nonstop incoming calls often leave her no time "to take a sip of water until 1 p.m."

"People usually call to report their physical conditions and ask for medical materials," said Zhu Xuan with the community committee.

According to Zhu, the committee staff are also responsible for calling previously registered sick residents to inquire about their physical conditions and arrange hospitalization for those in need.

Also, the community committee is in charge of purchasing and sending medicines and daily necessities to patients and elderly people who live alone.

"For weeks, everyone in the committee has left their phone on 24 hours a day, communicating with the residents. Many staff have lost their voice," Hua said.

Worried about being infected, some residents show impatience and even anger. "We all understand," Hua said. "Many people express their gratitude and some call afterward to apologize for their inappropriate words."

"Though it's hard work, it's well worth it as we are protecting the safety of residents in our community, and it would be a great comfort to me even to solve the problems of only one resident every day," she added.