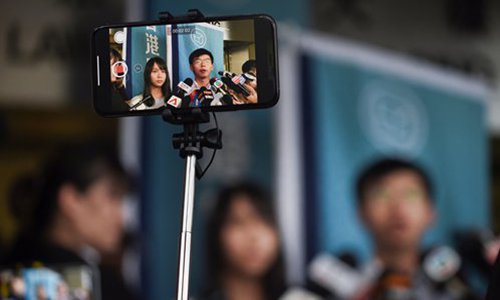 Wong posted a long Twitter thread on Sunday, connecting the topic of climate change with the Hong Kong issue, claiming that both share some similarities and that the world cheered and applauded for youth standing up and fighting. The Swedish girl responded in a Tweet saying that it is very "important" and "inspirational."

It's widely believed that Hong Kong anti-government protesters were desperate to grab the attention of the world by using Thunberg, who is Time magazine's Person of the Year 2019, to create online buzz.

Before the interaction, posters circulated in their social network groups showing a cartoon of Thunberg surrounded by the "LIHKG pigs" and black-clad protester figures. The post's caption reads, "We all try our best to defend our future" and "we are in this together."

Some Twitter users left comments, urging Thunberg not to comment on politics if she doesn't understand what is going on in Hong Kong.

A Twitter user said that Wong has never condemned the violent riots during months of Hong Kong protests, and that there is nothing brave and inspirational about him.

Throwing Molotov cocktails would pollute the environment, which is a common tactic rioters use to attack Hong Kong police officers, some netizens said on Chinese Twitter-like Weibo.

"I wouldn't give this much attention. It's more like Joshua [Wong] trying to catch more attention to his dying reputation," Tsuen Wan District Councilor Nixie Lam told the Global Times on Monday.

This is not the first time Hong Kong protesters have tried to find influential global figures to back their so-called pro-democracy movement: They used to write to Emma Watson, a goodwill ambassador for women's rights in the US, to attract global attention and support their color revolution, Angus Ng Hok Ming, executive president of the Guangdong-Hong Kong-Macao Greater Bay Area Youth Association, told the Global Times on Monday.

"It's a way to rapidly increase the numbers of followers and supporters. And it's very dangerous for those who worship famous people without really understanding the cause and result of the matter," he said.

Thunberg's comment on Hong Kong was not the only controversial remark she had made. The 16-year-old activist also misled the public in a tweet and picture about a so-called overcrowded German train, which showed she was seated on the floor. She said that she had to travel in a less comfortable condition, leading to a spat with German railway service Deutsche Bahn. The latter clarified that she had a first-class seat and train staff members treated her well. Some online users considered her post a PR stunt.