CHINA World benefits from 70 years of socialist practices in China

World benefits from 70 years of socialist practices in China 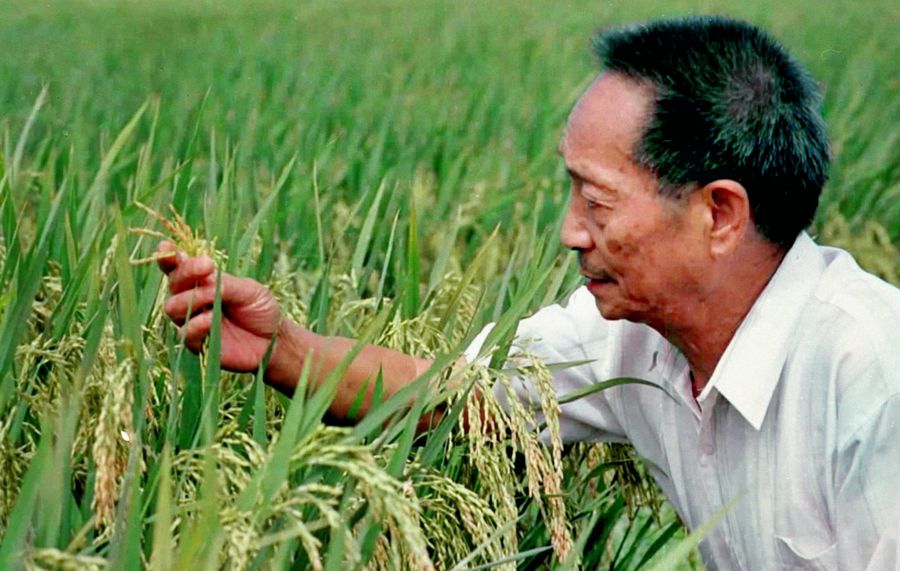 Yuan Longping, an academician of the Chinese Academy of Engineering, is also known as the "father of hybrid rice." (Photo: Xinhua))

BEIJING (Xinhua) -- Seventy years on, China has proved with miraculous development that a prosperous socialist country benefits not only its own people but also the rest of the world.

Xiao Zinan's family of five used to live in a small log cabin for 30 years in a remote village in the mountains, along with their pigs.

In the village of Jinman in Nujiang Lisu Autonomous Prefecture, southwest China's Yunnan Province, most of the villagers used to earn less than 2,800 yuan (about 393 U.S. dollars) per year.

"On rainy days, it always poured outside and drizzled inside," Xiao said.

Life in the shabby cabin ended in 2017 when Xiao and other 982 villagers moved to new houses in nearby developed areas thanks to the country's poverty relief relocation efforts. With a deposit of only 2,000 yuan, Xiao's brand new 3-bedroom house with a river view is fully furnished.

Between 2013 and 2018, China lifted 82.39 million rural residents out of poverty, about the entire population of Germany. Over the past 40 years, more than 700 million Chinese people have cast off poverty, representing over 70 percent of global poverty reduction.

China has made historic achievements in fighting poverty over the past decades, making itself a major contributor to the world's poverty reduction endeavors.

China has provided the world with a model of development from poverty to prosperity in a single generation, said Bert Hofman, an expert at the East Asian Institute of the National University of Singapore.

According to the National Bureau of Statistics (NBS), China had provided 400 billion yuan of assistance to 166 countries and international organizations, dispatched more than 600,000 assistance personnel and offered medical assistance to 69 countries, by the end of October 2015.

Over the past 70 years, China has managed to feed around one-fifth of the world's population with less than 9 percent of the world's arable land. Its grain output nearly quintupled, growing at an average annual rate of 2.6 percent from 1949 to reach 658 million tonnes in 2018, according to the NBS.

Hunger has long been a global problem. Around the world, more than 820 million people were hungry in 2018, according to a UN report.

"If hybrid rice is planted in half of the world's 147 million hectares of paddy fields, the additional yield alone can feed 500 million more people," said Yuan Longping, an agronomist known for developing the first hybrid rice strain.

Since the 1980s, Yuan's team has offered training courses in dozens of countries in Africa, the Americas and Asia -- providing a robust food source in areas with a high risk of famine.

So far, Chinese experts and technicians have carried out more than 300 small-scale projects in nine African countries, promoted 450 agricultural technologies, and trained nearly 30,000 local farmers and technicians, according to Ma Youxiang, an official with China's Ministry of Agriculture and Rural Affairs.

Yuan was awarded China's Medal of the Republic for his great efforts to the well-being of mankind, prior to the 70th anniversary of the founding of the People's Republic of China.

Nobel laureate Tu Youyou also received the medal for her consistent contributions to the control of malaria. With the discovery of artemisinin, a group of drugs used to combat malaria, the 89-year-old scientist has saved the lives of millions.

In June, Tu announced her team had proposed solutions to the problem of artemisinin resistance, providing new evidence that artemisinin is still "the best weapon" against malaria.

Since 2017, no malaria cases have been reported in China, meaning that the epidemic has been eradicated in the country. But China has continued to carry out research on malaria control and prevention and develop artemisinin-based antimalarial drugs for the global fight against the disease.

"Global malaria control is in line with the thrust of the Chinese government's initiative to build a community with a shared future for humanity," said Pedro L. Alonso, director of the Global Malaria Programme of the World Health Organization.

China has proposed the Belt and Road Initiative (BRI) and the concept of building "a community with a shared future for humanity."

More than 166 countries and international organizations have signed BRI cooperation documents with China so far.

The concept of building a community with a shared future for humanity has been endorsed by documents of the United Nations, the Group of 20 and other international organizations, playing a positive role in promoting peace and progress of humanity.

"Amid the tide of globalization, the Communist Party of China (CPC) has integrated the national development strategy with the world development trend and put forward the epoch-making concept of a community with a shared future for humanity," said Hu Jianjun, a member of the standing committee of the CPC Lianyungang Municipal Committee.

From 2013 to 2018, China contributed more than 28 percent of world economic growth on average, according to a white paper titled "China and the World in the New Era" issued by China's State Council Information Office.

Estimates show that without China, the average annual growth rate of the world economy from 2013 to 2016 would have slowed by 0.6 percentage points and the intensity of fluctuation would have increased by 5.2 percent, the white paper said.

The speed of China's shift toward greener growth is equally impressive. China's per unit of economic output is obtained with 43.1 percent less energy consumption in 2018 than in 1953, and 11.4 percent less than in 2015. Instead of pursuing reckless industrial expansion, Chinese officials now show little tolerance for smokestack factories and energy waste, even if that means slower GDP growth.

Apart from economic achievements, China has been making tremendous efforts to improve and protect the environment. The "China speed" in greening the Earth is leading the world and is visible from space. A study using data from NASA satellites revealed that China contributed to a quarter of the increase in global green leaf area since the turn of the century.

For those who have undergone dark days of their own, it is easy to imagine how the Chinese people cherish peace and yearn for prosperity. Today, with a population of 1.4 billion, China's development creates a vast range of opportunities for the rest of the world. 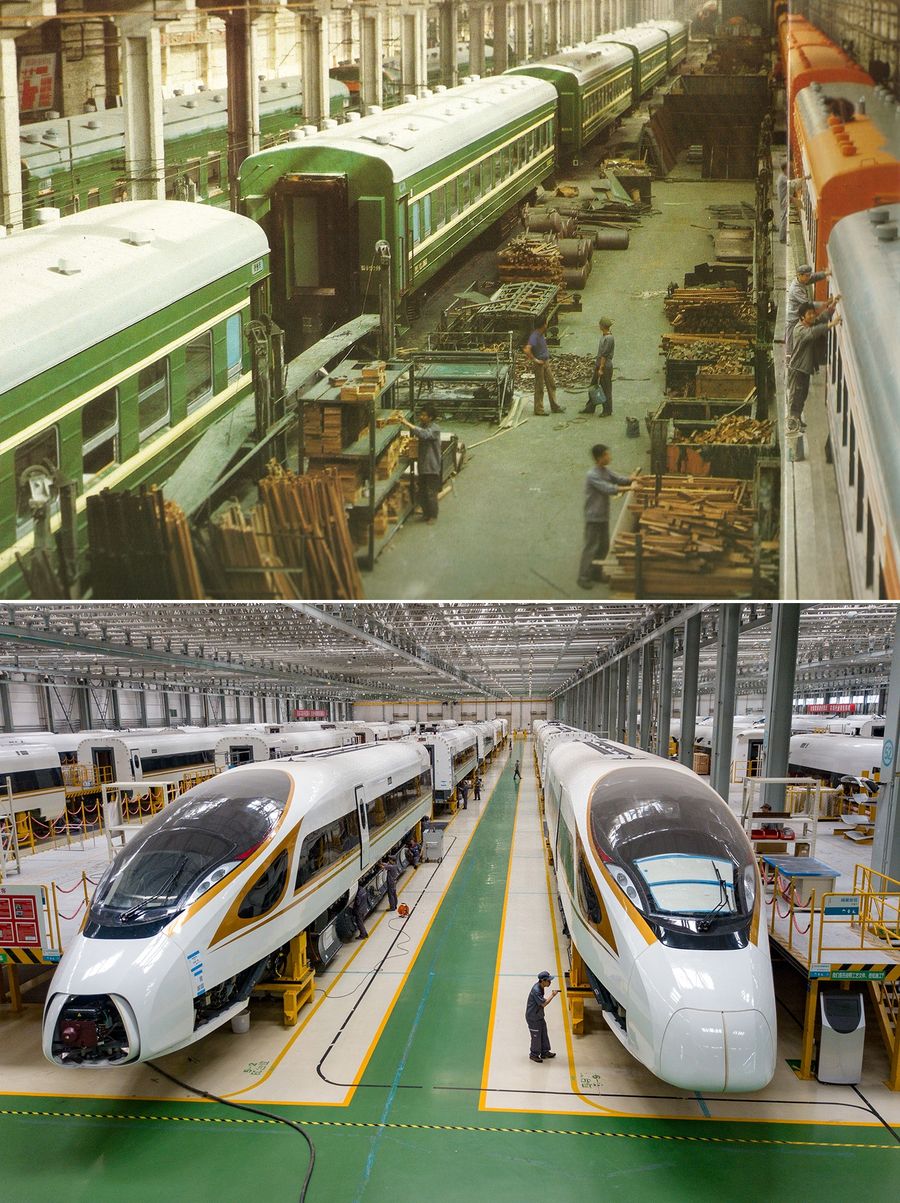