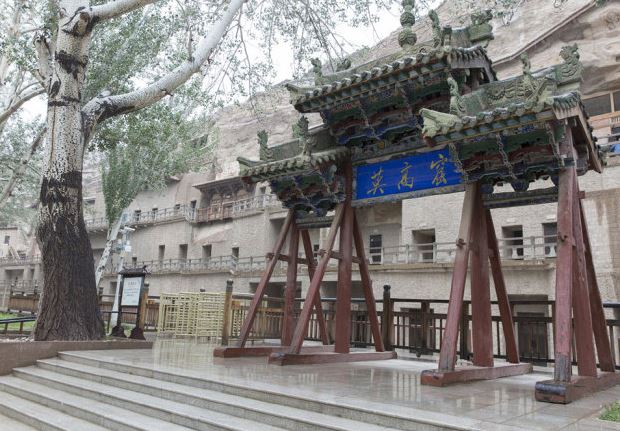 The Mogao Grottoes, a renowned UNESCO World Heritage site in northwest China's Gansu Province, was temporarily closed to tourists on Wednesday, the second time this year due to heavy rain.

At around 8:30 p.m. on Tuesday, the site began to received intermittent rainfall and the accumulated precipitation from Tuesday to around 2:30 p.m. on Wednesday reached more than 20 mm.

The Daquan river in front of the grottoes was hit by the flood. Currently, the rain and the flood have not affected the safety of the cultural relics in the grottoes, said Luo Huaqing, deputy director of the Dunhuang Academy.

The cliff of the grottoes has seen sporadic debris fall down and the site was closed to tourists for safety reasons. Tickets sold will be refunded.

The rain caused the humidity of the grottoes to rise and if the installed monitoring equipment finds the relative humidity exceeding 63 percent, the grottoes will be closed temporarily, said Guo Qinglin, with the Dunhuang Academy.

It was first constructed in 366 A.D. For more than 1,000 years, it was a popular marketplace, travelers' stop and a religious shrine on the ancient Silk Road. The local arid climate with limited rainfall is a major reason that the heritage site has been preserved for thousands of years.

Recently, heavy rain hit the city of Dunhuang, where the Mogao Grottoes are located. It was the biggest rainfall around the grottoes since the Dunhuang Academy began tracking records of precipitation there in 1989.