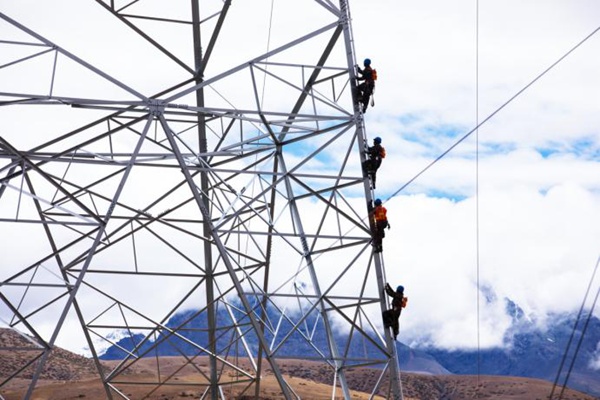 Worker with the State Grid works on a transmission tower. (Photo: Xinhua)

The world's highest ultra-high voltage (UHV) transmission and transformation project finished construction in China's Tibet autonomous region after the last tower in Gyirong of Xigaze was connected to its cables on July 26.

When connected to the grid by the end of this year, the project will provide safe and stable access to electricity for almost 380,000 people in nine districts and counties nearby, putting an end to the long-term isolated operation of the local grid in Ali prefecture.

This is China's fourth massive grid-related project built on the roof of the world so far. The total investment of the grid project tops 7.4 billion yuan (about US$1.06 billion).

The project covers a distance of some 1,689 kilometers between Xigaze and Ali prefecture. It has managed to get across the Yarlung Zangbo River in three different places. The project, standing at an average elevation of 4,572 meters, consists of 3,352 towers spread across permafrost, swamps and areas of unpopulated land.

Apart from high altitude, the harsh natural environment posed another severe challenge to the construction work. Statistics show the oxygen level along the route reaches only 50% to 60% of that at sea level, and the diurnal temperature range reaches more than 25 degrees Celsius. Thus, the actual construction period could only last for six months every year.

The highest transmission tower stands at an altitude of 5,357 meters, and it weighs 28 metric tons. Due to the geological conditions, many of the construction materials needed have had to be carried to site using manpower and horses. The longest transport distance in this regard reached almost 5,400 kilometers.

Communication base stations as well

This is part of a wider project to build communication base stations on the transmission towers as well, which would be a truly groundbreaking achievement in high-altitude regions.

According to industrial sources, extra cables, except those needed for providing electricity, have been reserved for communication purposes in the future.

Besides, each transmission tower is installed with 5G base station terminals, and an interface has been reserved every three to five kilometers. In this way, the grid project also constitutes a 1,689-kilometer-long communication line.

In addition, via 3D modeling, the command center of the project allocates each of its 3,352 transmission towers unique identification. This further ensures the safe and stable operation of the grid network.

Helps locals work out of poverty

During the peak of the project's construction period, nearly 30,000 people worked on the frontline, of which more than one-third of them were local farmers and herdsmen.

Through participating in this project, they have not only contributed to build their hometown, but also learned multiple transferable skills that help increase their incomes at other workplaces.

Dawadunzhu and Shiqu are a couple from Xigaze working on the project for two years. "We came here to work and earn more money, so that our child could go to school," said Shiqu, mother of a six-year-old.

Dawadunzhu has gradually learned to become a rebar worker during the construction work. "With this skill, I also can earn more money working at other construction sites," he said.

The couple's experience also encouraged other young people in their village to work for the project.

"After the project is completed, I want to bring my family and my parents to visit Lhasa," Dawadunzhu said proudly. "This grid project is built for us, and I myself also work here, so I will be thrilled when the project is connected to power."