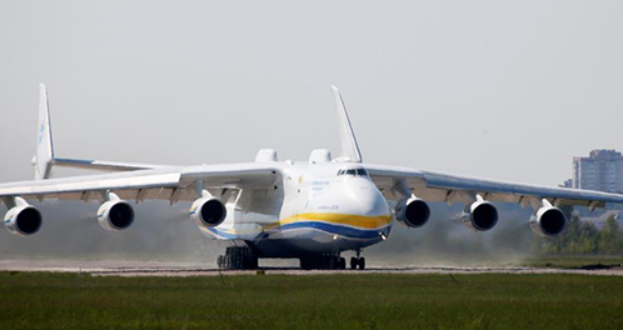 Antonov An-225 Mriya, a cargo plane which is the world's biggest aircraft, drives along an airfield starting its first commercial flight to the Australian city of Perth, in the settlement of Hostomel outside Kiev, Ukraine, May 10, 2016. (Photo: Agencies)

The world's largest cargo plane, the An-225, has joined the international convoy to transport medical supplies from China.

Since the outbreak of the novel coronavirus disease (COVID-19) worldwide, foreign countries have been running short on medical supplies, and with China possessing high production capacity, sending large military aircraft to transport medical supplies has become an efficient option to help relieve supplies shortage and fight the COVID battle, experts said on Monday.

The An-225 arrived in North China's Tianjin on Sunday evening to transport 400 tons of medical supplies bought from China, including seven million masks and several hundred thousand protective suits, to Poland, cannews.com.cn, a Chinese news website on the aviation industry, reported on Monday.

The An-225 is the world's heaviest and largest cargo aircraft and has just been upgraded, which kept the plane grounded for nearly two years, Ukrainian media Kyiv Post reported on Saturday.

"With only one flight, the An-225 can bring as much cargo from China as 10 Boeing 787 Dreamliners," the Kyiv Post quoted the Polish Ministry of State Assets as saying.

Despite this, the giant aircraft may have to make two round trips to fulfill the Polish contract, because its maximum capacity is about 250 tons and the medical supplies weigh 400 tons, the report said. This is probably the reason the An-225 was chosen for this mission, analysts said.

Air defense expert Fu Qianshao told the Global Times on Monday that the An-225 was originally designed to airlift a spacecraft, so it was given very strong payload-carrying capabilities, much stronger than other heavy military cargo planes like the C-5 and An-124, which are already of a class larger than China's Y-20.

The An-225 was developed by the Soviet Union in the late 1980s and was inherited by Ukraine and mothballed following its collapse. It was repurposed in 2001 to a civilian cargo carrier, reports said.

The German military also announced on Wednesday that it will hire the An-225 to transport medical supplies to Germany, China Central Television reported on Friday.

Since the COVID-19 broke out in many countries and China's phased success in containing the disease on a domestic level and its resumption of high production capability, many foreign countries have sent military cargo planes to China to transport medical supplies back home.

For instance, Russia sent an An-124 and two Il-76 cargo planes, and Algeria sent two Il-76s to Shanghai on April 4 to load supplies, including face masks, the National Business Daily reported on April 5.

Fu said that military cargo planes are usually more efficient than civilian passenger or cargo planes because they possess stronger payload-carrying capabilities and have rear or even front cargo doors, enabling vehicles to directly offload cargo into the aircraft, resulting in very fast loading speed.

All of these countries are engaged in an intensive fight against the COVID-19 and must want to get the supplies as fast as possible, Fu said.