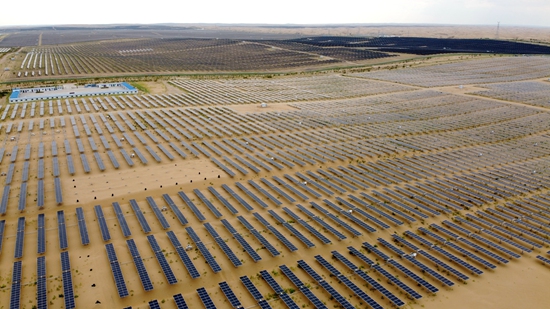 The No.1 project of the Dalad Photovoltaic Power Base was completed on September 13, which means the world's largest desert solar power station will soon be connected to the national grid.

Located in the Kubuqi Desert in North China's Inner Mongolia Autonomous Region, the project covers an area of about 1.2 million square meters with an installed capacity of 69.03 megawatts. The annual power generation capacity is expected to reach 2 billion kWh, creating a value of 620 million yuan ($90.8 million).

After joining the national grid, the project will save an equivalent of 660,000 tons of standard coal, reducing emissions of 1.65 million tons of carbon dioxide and 450,000 tons of dust every year. This will effectively improve the energy structure and ecological environment of the Inner Mongolia Autonomous Region.

Sand barriers were planted along the periphery of the power station, and protective green belts were built on both sides of the main roads. Also, dwarf economic forests were densely planted between photovoltaic arrays to stabilize quicksand and resist sand blown by the wind.

In addition, economic crops such as red dates and astragalus membranaceus were planted at the station, covering an area of almost 32 million square meters, providing strong support to poverty alleviation efforts.