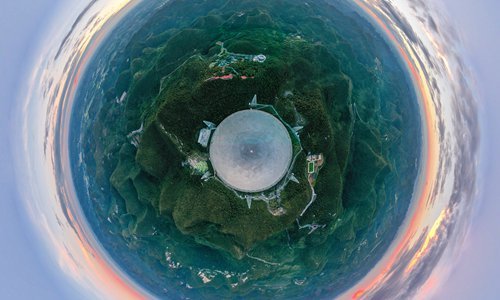 China announced Wednesday that its Five-hundred-meter Aperture Spherical Telescope (FAST) - the world's largest and most powerful radio telescope - has discovered more than 240 pulsars and is expected to detect the primordial gravitational wave of the Big Bang.

FAST will also be able to help extend China's deep space exploration to the edge of the solar system, allowing the country to meet its major strategic needs.

According to the Science and Technology Daily on Thursday, the National Astronomical Observatories of the Chinese Academy of Sciences (NAOC) said at a press conference on Wednesday that since its acceptance inspection in January, FAST  has been operating stably and reliably.

FAST has observed and served more than 5,200 hours in the past year, nearly double its expected goal, said NAOC.

FAST has discovered more than 240 pulsars, and more than 40 high-level papers have been published based on the telescope's data.

With the improvement of its performance, the scientific potential of FAST has gradually emerged, Science and Technology Daily reported.

"The sensitivity of FAST is more than 2.5 times that of the world's second largest single-aperture radio telescope. This is the first time that a China-built radio telescope has topped the world on the important indicator of sensitivity, which is significant to promoting China's astronomy to achieve major breakthroughs," said Jiang Peng, chief engineer and executive deputy director of the FAST Operation and Development Center.

Also, FAST has the ability to extend China's deep space exploration and communication capabilities to the edge of the solar system, which will allow the country to meet its major strategic needs, the media report said.

In February, nearly 100 scientists began to use and process FAST scientific data.

"In April, the telescope time allocation committee began to solicit free application projects from the domestic astronomy community. More than 170 applications have been received, with total application time of about 5,500 hours. Only 30 percent of the actual approved 1,500 hours can be supported, which shows that the competition of the FAST telescope observation time is quite fierce," said Chang Jin, member of the Chinese Academy of Sciences and director of NAOC.

FAST was completed in 2016. Its reflective surface area is equivalent in size to about 30 standard football pitches, said the report.

FAST's huge reflector can actively adjust its shape in real time according to the position of celestial bodies. Its 30-ton cabin moves at an altitude of 140 meters and a range of 206 meters, all with control accuracy down to the millimeter.

As a result, the engineering team has carried out technical research to overcome many technical problems in the fields of mechanics, measurement, control, materials, and large-scale structures.