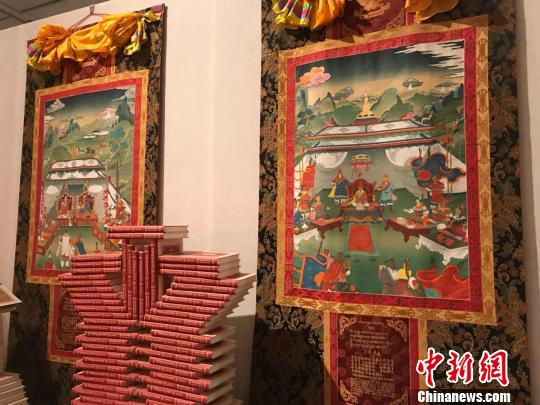 Part of the exhibition of The Epic of King Gesar on July 12, 2018, in Chengdu. (Photo :Chinanews.com)

The most complete version of The Epic of King Gesar, generally considered the world's longest folk epic, was exhibited for the first time Thursday in Chengdu, capital of China's southwestern Sichuan Province.

As the world’s oldest epic poem that is still performed today, the Epic of Gesar, which has over one million lines of verse, is longer than the world’s five other great ancient epics put together, including ancient Greek poet Homer’s “The Iliad” and “The Odyssey” and ancient India’s “The Mahabharata.”

The exhibited version contains more than 80 million words and 300 episodes. It took more than a decade to collect and organize the copies of the epic and materials relating to it, which were scattered across ethnic Tibetan inhabited areas.

Researchers have obtained many different editions of the epic as well as different versions published over the last 60 years.

The Epic of King Gesar tells how an 11th century Tibetan demigod king conquered his enemies and helped the ordinary people.

The themes of paintings and sculpture are often taken from the tales of Gesar. King Gesar is also prominent in Thangka paintings, Tibetan Opera, and traditional Chinese performance shuochang – folk rap singing.

The most complete version of The Epic of King Gesar was exhibited on July 12, 2018, in Chengdu, capital of southwest China's Sichuan Province. /Photo via Chinanews.com

Down through the centuries, the epic has been passed down orally by wandering minstrels, often illiterate herders or peasants from Tibet, Inner Mongolia Autonomous Region or Qinghai Province.

Not only are there people narrating the story, the epic is also kept alive and spread in a variety of forms such as the search of relics associated with King Gesar.

There are more than 100 minstrels today who are still narrating the Gesar tales, and in the course of their narration, they weave into the epic their own understanding and perception of history and reality.

Thanks to such recreation and enhancement, the epic continues to grow, absorbing the Tibetan people’s knowledge of history, society, nature, science, religion, customs, culture and the arts, and serves as important literature for studying ancient Tibetan society.

A visitor looks at a Thangka painting at the exhibition of The Epic of King Gesar on July 12, 2018, in Chengdu. /Photo via Chinanews.com

As a typical example of an intangible cultural heritage, the expanding ancient epic was successfully inscribed on the UNESCO Representative List of the Intangible Cultural Heritage of Humanity in 2009.

Sichuan Publishing Group is expected to publish the newly collected Tibetan epic in late 2018 and has plans to release both Chinese and English versions of the story in the future.