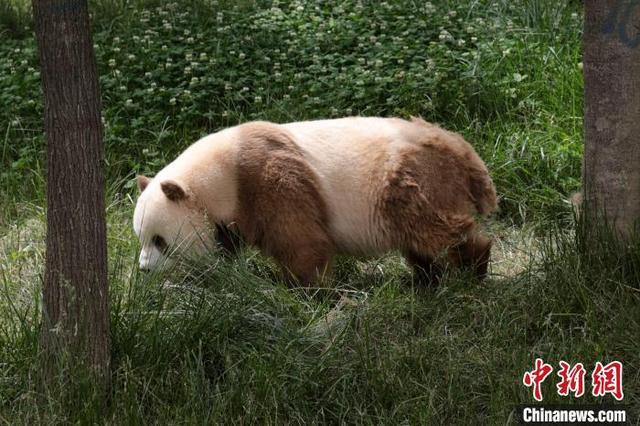 The world's only captive brown giant panda, nicknamed "Qi Zai," meets the public for the first time on May 28, 2021. (Photo: Chinanews.com)

XI'AN -- The world's only captive brown giant panda, nicknamed "Qi Zai," met the public for the first time on Friday, during the trial operation of a science park in Northwest China's Shaanxi province.

Covering an area of over 28 hectares, the science park is located in Zhouzhi county at the northern foot of the Qinling Mountains. It aims to protect and popularize four rare animal species of the mountains, namely giant panda, crested ibis, golden monkey and takin.

The world's first brown panda was discovered in 1985 in the Qinling Mountains. All recorded photographs of wild brown pandas were taken in the area.

The Qinling giant panda is a subspecies of giant panda first recognized in 2005. It has a smaller and rounder skull, shorter snout and less fur than the more familiar Sichuan subspecies.

According to panda experts, brown pandas could be the result of genetic mutations or atavism and further study is needed on the topic.