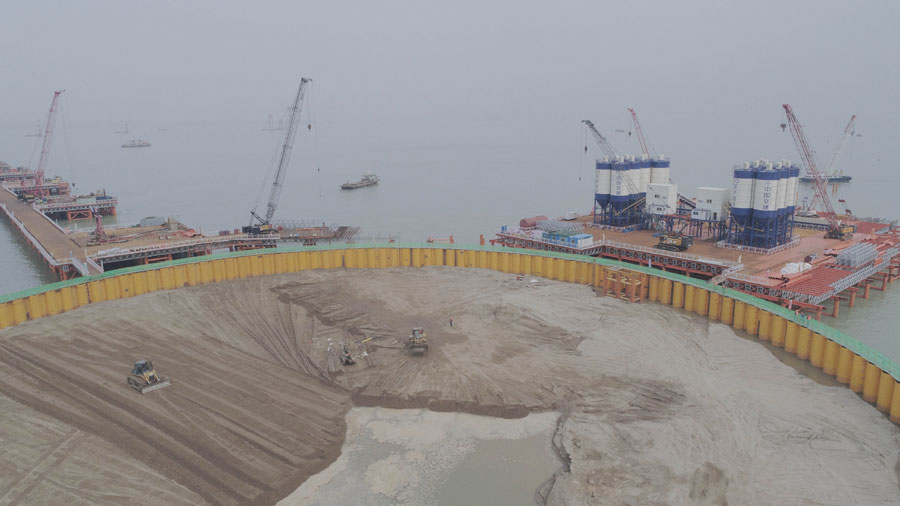 The first tube of the world's widest immersed channel is expected to be put in position of a mega bridge across the Lingding Bay at the mouth of the Pearl River in South China soon, according to an assistant chief engineer of the project.

Yang Runlai from CCCC First Harbor Engineering Co Ltd said Thursday that workers are preparing for the connection of a tunnel end on an island with the first immersed tube, the Science and Technology Daily reported.

Yang's company took charge of constructing an island and major part of the tunnel of the Shenzhen-Zhongshan Bridge, another mega project of bridge, island and tunnel after the Hong Kong-Zhuhai-Macao Bridge (HZMB).

The new project, 38 kilometers from the HZMB, is 24 kilometers long. It has the immersed tunnel in the east and the bridge section in the west to ensure the sea routes there.

With a length of 6.8 kilometers and a width of 46 meters, the two-way eight-lane tunnel will be the largest and widest in the world upon completion. Its tunnel will be 1.2 meters longer and two lanes wider than the HZMB.

Yang said the immersed tunnel used the steel shell tube, the first of its kind in China, and there were many other new structures and technologies, which brought lots of challenges, such as lack of technical standards in the country.

After tubes are built in factory, they are floated to the construction site, and the most difficult process is to sink and connect, Yang said. His company has invited experts to deliberate in rounds on the cement pouring, sealing and connection.

The Shenzhen-Zhongshan Bridge is another important infrastructure project of the country's 13th Five-Year Plan (2016-2020). The construction started on Dec 29, 2016. It is expected to put into operation in 2024.