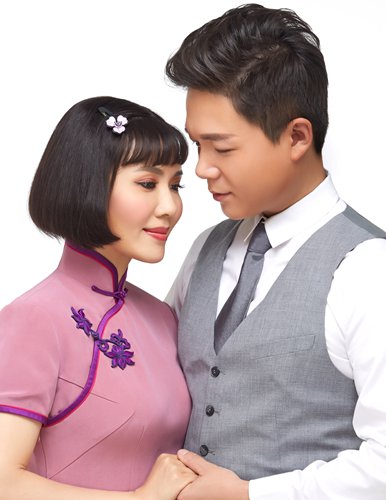 Promotional material for Regret for the Past Photo: Global Times)

An opera adaptation of Chinese literature master Lu Xun's Regret for the Past will be staged at Beijing's Poly Theater for two nights on May 2 and 3 to mark the 28th anniversary of the death of Shi Guangnan, the musician who brought Lu's short story to the stage in 1981, said the performance's production company Shunnian Culture on Wednesday. As part of Shunnian Culture's Tribute to Masters series, the performances at the Poly Theater marks the third time the opera has been performed since its debut in 1981. A huge hit when it debuted, the opera was rearranged and staged by the China National Opera & Dance Drama Theater in 2014. According to Chen Wei, the director of the most recent performance, the upcoming version, which combines opera singing techniques and Chinese folk music, will stick to the classic core story while introducing some innovative elements. "This is not a simple restaging of the opera. We are sharpening it from lyrics to music, especially when it comes to matching Chinese poetry with music. So we have much work to do before the performances," she said on Wednesday.  A short romantic story written by Lu in 1925, Regret for the Past focuses on the tragic love story between Juansheng and Zijun. The story is narrated in the form of a monologue by Juansheng, who tells how they met, fell in love and started a family, but saw their love and marriage fall apart in the end.